For those of us who don't know where Mirfield is, because it is way too far east from our home turf, we'll offer an alternative ride. Meet 9am in Keighley for a trundle up to Silverdale. I'd even suggest a lunch stop at the Falcon Inn in Arncliffe to get the social season off to a good start.

It looks like the Sutton Bank ride was well attended - looking forward to a full report. Meanwhile four more Condors met in Keighley at or about the appointed hour and took full advantage of the bright, sunny and warm conditions. The back roads to Settle were a pleasure and we had time for cofee in the sunshine, followed by scenic Silverdale. No pictures I'm afraid - there was no stopping these lads once they got going..

Then a rattle down Littondale with an increasing tailwind for a pint and lunch at the Falcon. Fuelled up for the ride home we even took in the pleasures of Addingham Moorside before tackling Keighley and the home roads. The picture below is in Arncliffe - I tried to get one outside the pub but then thought, for a change, of trying to show Condors on their bikes. As you can see, two of them tried to leap off again before the shot was taken. 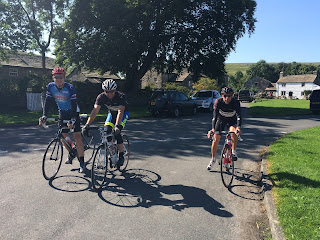