﻿
I've been interrogating the web hoping to find out what our racing men have been up to over the weekend but with no success. With Chris being tied up with his sisters wedding over the weekend and Oakworth Steve being otherwise engaged on the BAM Tour of Holland it was left to Mel and myself to fly the Condor flag at the White Rose Classic sportive on Sunday. 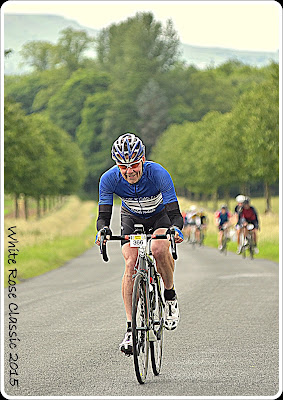 It was not a great day weather-wise. Heavy rain and high winds were forecast and that's just what we got. I was optimistic at the start, it was dull but dry with the temperature being 14° at 7.30am and I expected it to get warmer not colder. The high winds and drizzle started on the approach to Greenhow and riding north from Grassington it was looking black in Upper Wharfedale. The rain got harder and the wind stronger over Fleet Moss but at least the thick mist disguised the climb although precipitation in the eyes (or on the lenses) made the descent down to Hawes an adventure in itself.
The weather just got worse for the Coal Road, 10° and blustery winds for the narrow winding descent down  to Dentdale. From Ribblehead we picked up a tail wind and by Attermire the weather was improving. By Airton the roads were dry and on Langbar climb it was getting too warm. At the finish Mel and I chilled in the sun on the verandah at the magnificent Ilkley RUFC, having a pint of Mary Jane and swapping stories of the day with fellow survivors.
Melvin had a magnificent ride finishing 3rd fastest with his time of 6.39.14 being very similar to previous years despite the weather. I had been happy with my progress but lost time with fatigue over the last 25 miles or so recording a time of 7.51.04 to give me 28th fastest overall, there were over 200 entered for the long route but many did not finish or transferred to the shorter routes. 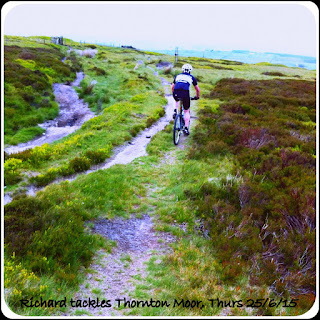 We had an early start for last weeks mountain bike ride but this coming Thursday we are back to a 6.30m start from Brighouse.