This week's ride report contains a thank you, an apology and an enquiry.

First the thank you - to the chaps for waiting at the start for a few extra minutes while the last straggler turned up in Keighley (me). I'd loitered through town after seeing Richard Burnham going up Ingrow, and hence was late at the start. However Richard wasn't keeping warm waiting for the Denholme contingent to come through, like I'd thought, but turns out that a major mechanical had befallen our comrade and he'd been forced to retire DNK (Did Not reach Keighley). The first of our 'ten green bottles' had fallen.

Next the apology - to Pete (Smith) and Peter (Whitely), from all of us in the rest of the gang and especially Peter (Horne) - for setting such a furious pace at start which caused our two clubmates to turned for home on Cowling Hill! Please, please shout out next time and we will ease up. This is supposed to be the social season, after all. Two more of the green bottles had gone.

I've found that riding second-row is ideal in order to be sheltered but still within shouting distance of the pace-setters, and that I can slip down a couple of bike lengths over a crest while staying in contact with the group or at least reducing the catch-up work required. So do please try it again chaps. And talk to Peter the map-master general about designing us a route with fewer bleedin hills.

Now the intermission: a picture of Pendle Hill taken en route to our butty stop in Barley. Whilst I enjoyed the view here from the top, you will note that Barley can be reached from Blacko by other routes which involve clocking up fewer ascending meters on Strava, but these routes apparently can be discounted. 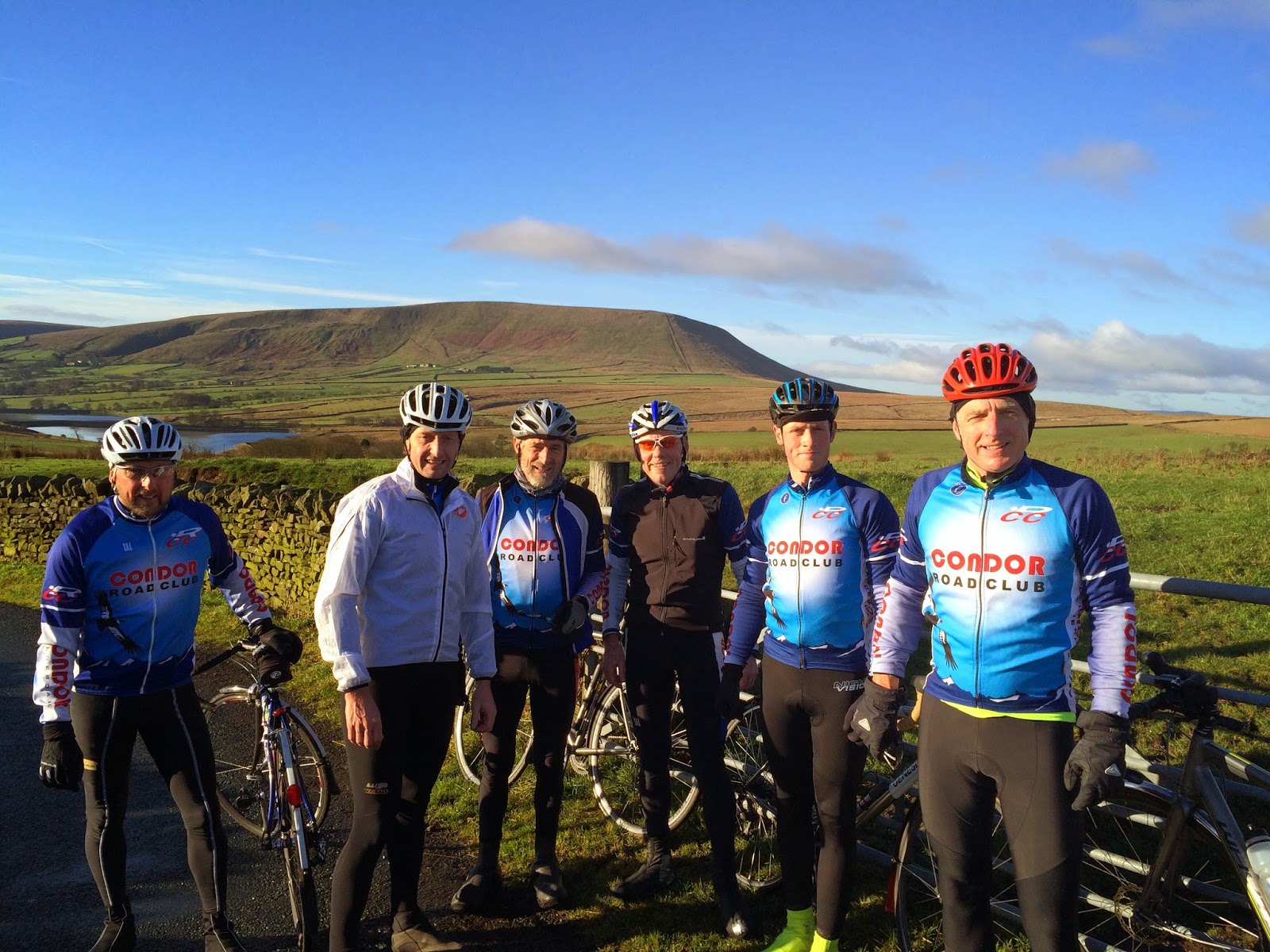 Seven of the Ten remain

Finally, the enquiry. I peeled off at Mytholmroyd and headed straight home with Nigel, rather than following the flock to The Cross Keys in Siddal. Having been away for a week recently I thought that putting in an appearance at home might be useful. Meanwhile, did the last 5 green bottles get suitably filled with beer? And who won the Imps freewheeling contest?

Addendum - from the last remaining Peter
There were just 4 green bottles left when Ian and Nigel abandoned us , Steve had taken a left at Hebden Bridge to return to the security of Bronteland via Cock Hill. Once rid of the Wainstalls Whippets, Paul, Chris, Damien and myself settled  into a steady pace for a potter up Scout Road enjoying a superb panorama over the Calder Valley bathed in a late autumn glow, a low sun creating long shadows enhancing the landscape and filling us with an exultation of spirit. So much so that instead of opting for the most direct route to our stated destination of the Cross Keys at Siddal we threw in a right turn and went over the tops to Hubberton and down to Triangle.
Not wishing to arrive at the pub too early we then sprinted up the Stirk Bridge climb to Norland (well Paul and Chris did the sprinting whilst I reminisced about the last time I raced up the hill in anger, whilst  taking part in the Condor RC Hill Climb in 1978) and Damien complained about his new bike being heavy.
We spent an hour with our friends from the Imps who had been well and truly thrashed in their own free-wheeling competition by the Batley CC. Whilst the Lancaster Bomber ale was spot on we soon tired of having our ears assaulted by the live band and tore Chris away from a new best friend to seek  fresh air and peace.
If you are in Siddal and live in Hipperholme the obvious route home is of course up Trooper Lane; Damiens response  showed maturity, and vision beyond his years. He simply responded 'I'm not going up f***ing Trooper Lane,' and headed off in the direction of Exley (sadly this was not the first time on the Sabbath that he had lowered the tone by using that and similar expletives). However, undeterred, I was happy to face the cobbles alone - I should have known Paul and Chris better than  to think they would allow me to enjoy the hill in my own splendid isolation, no, despite it being in totally the opposite direction to their homes they decided to accompany me - or to be more accurate they decided to sprint off like greyhounds from the starting gate and wait for me at the top smiling like Cheshire cats.

On a more serious note, as Ian has said, the early pace up Cowling Hill towards Black Lane Ends was far too fast for the time of year, in future weeks I hope we can show more discipline and ride together.
Posted by Ian Robinson at Monday, December 01, 2014