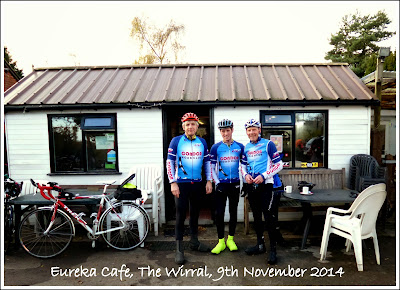 Great day out at Sundays Eureka Audax, a pity our numbers were down due to the event being oversubscribed and entries closing early. Nevertheless there were three Condors toeing the start line in Cheadle at 8am on Sunday - well thats not quite accurate, Chris and I were toeing the start line whilst Steve was still putting on his make-up with the urgency of someone who thinks he's there for a holiday. As predicted the peloton split up in the early miles due to numerous sets of traffic lights and Steve found himself on the wrong side of the splits and was unable to bridge the gap.
Chris and I stayed on the front together for the first 20k before swinging off to let two VC167's through, Bob Johnson and his team mate, whom Bob immediatly started to half-wheel - then full wheel - then full bike until the poor lad had had enough. I commiserated with briefly as he dropped back through the ranks and off the back.
By this time there were only five of us left at the head of affairs, including Sheffrec's flying surgeon, Julian Humphrey, resplendent in a Castelli one piece bodysuit. We arrived at the Eureka 10 minutes before the checkpoint was due to open and had to resist an overwheling desire to keep up the momentum by jumping straight back on the bikes as soon as our cards were stamped. We did resist this urge, and much to Flat Earth Bob's disapproval joined the massed ranks of Merseyside and Deeside cyclists by sitting down to enjoy pint mugs of tea and home made cakes.
Steve had arrived at the Eureka only about 5 minutes after us, he was mumbling something about not knowing it was going to be a race but soon recovered his 'joie de vivre' and joined us to soak up the atmosphere at this iconic cyclists rendezvous.
Once refreshed the three of us headed south, passing to the west of Chester, over the Dee and in to Wales, skirting round the east of Wrexam and down to Bangor on Dee for the information check.  On the roads north-east to Tattenhall we swept up Julian who had briefly been off-course, and formed a well drilled quartet to the Ice Cream Farm check where we once again enjoyed refreshments.
It was now about 70k to the finish and Chris was begining to warm-up. During those last miles the speed rarely dropped below 20mph and Steve, Julian and myself were rarely seen at the front as Chris towed us past other Audaxers who had perhaps spent less time enjoying rest and nourishment to finish back at Cheadle Church Hall with 133 miles on the clock at an average speed of 18mph.
Now for the Social Season - at least untill the Winter Solstice event on the 21st of December.
Posted by petehorne at Tuesday, November 11, 2014