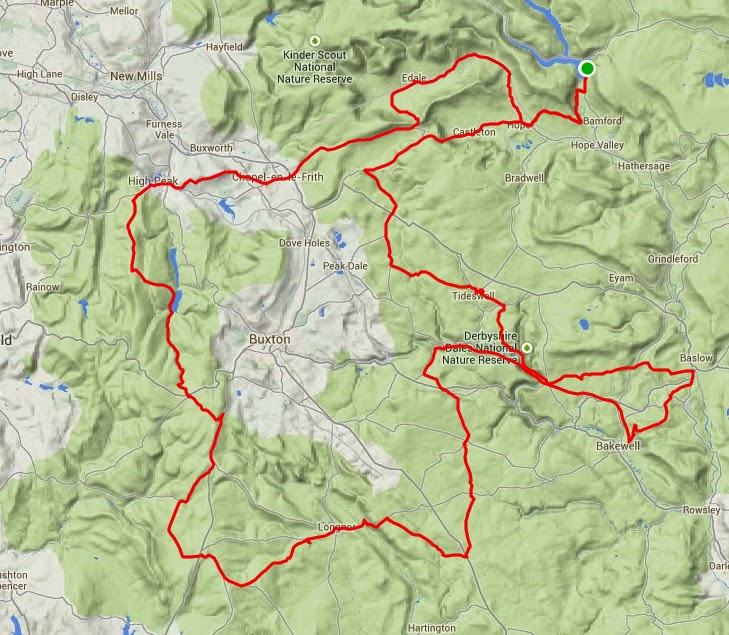 With Damien being a late withdrawal we were down to three for Saturdays Tour of the Peaks. With so much choice of quiet lanes and classic climbs it wasn't easy to decide on a route and with a poor weather forecast I was keen not to overdo the distance so we settled on the above mix - 85.4 miles with 7841 ft of climbing according to Paul's Garmin.

As planned we parked in the lay-by at Ladybower, were on the road for 8.30 and on unclassified singletrack lanes within half a mile. Thankfully it was dry if somewhat overcast and, as you would expect for August, mild. We were soon winding our way up between the towering limestone pinnacles of the giant collapsed cavern that is Winnats Pass with Chris and Paul romping off ahead of me I was feeling strong and full of anticipation for the day ahead. From the summit we headed south through Tideswell to the banks of the River Wye before attacking the 2nd classic of the day, Monsal Head. Being keen to include the splendid old railway tunnels on the Monsal Trail into the days jaunt we did a circuit around the western edges of the Chatsworth Estate taking us to the old Bakewell rail station where we joined the said trail and just couldn't resist stopping for morning coffee at the old Hassop Station, now a coffee shop a mile down the line. 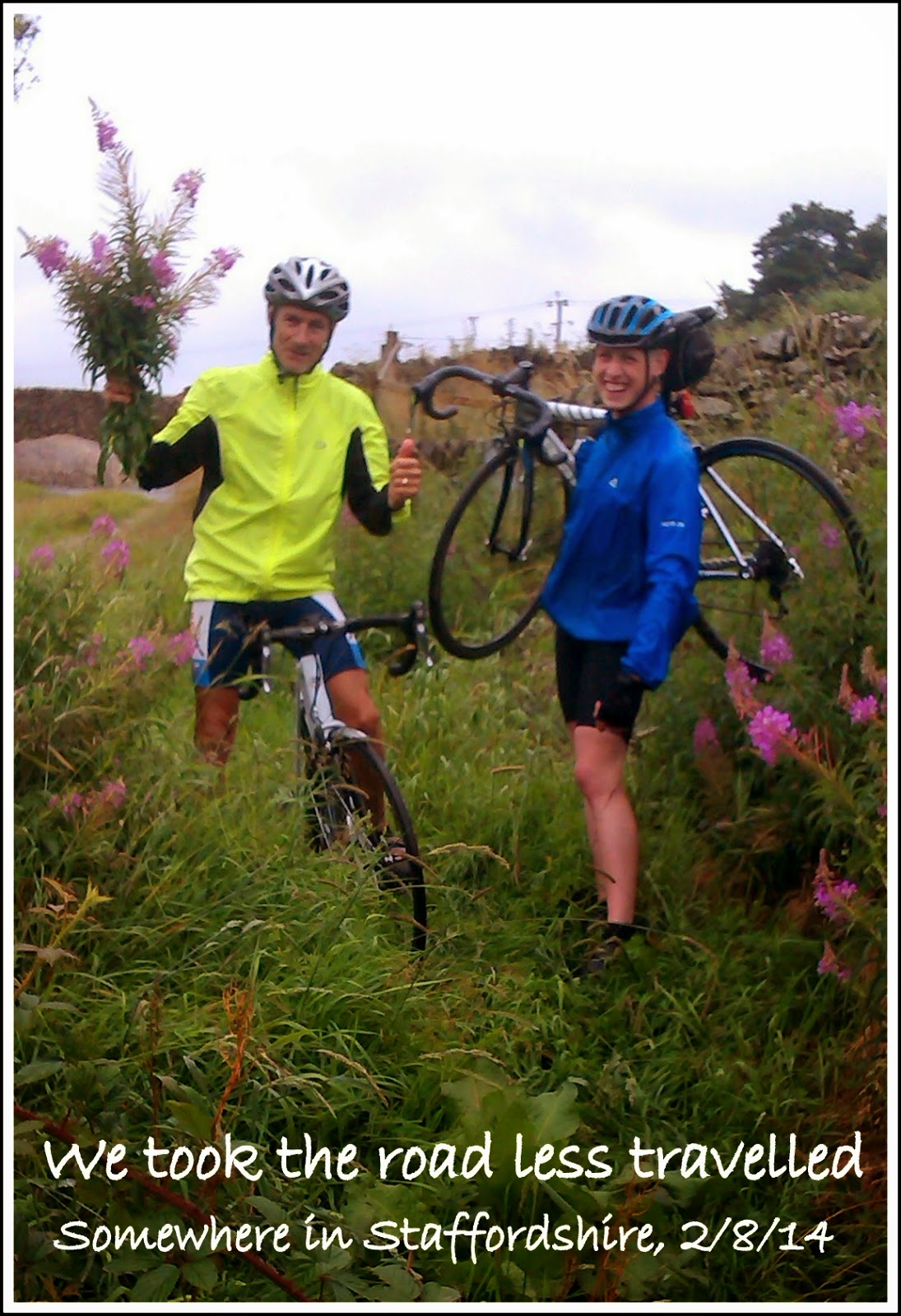 After leaving the Trail at Millersdale it was south through quiet lanes to lunch at the renowned  Old Smithy Tearooms at Monyash, an excellent cafe where Chris was in his element looking at ancient horseshoes and rusty chisels. It had been necessary to don rain jackets en-route to Monyash and it did, as forecast rain quite hard whilst we were having lunch but was bating by the time we hit the road again and within half an hour our waterproofs were taken off and not needed again. 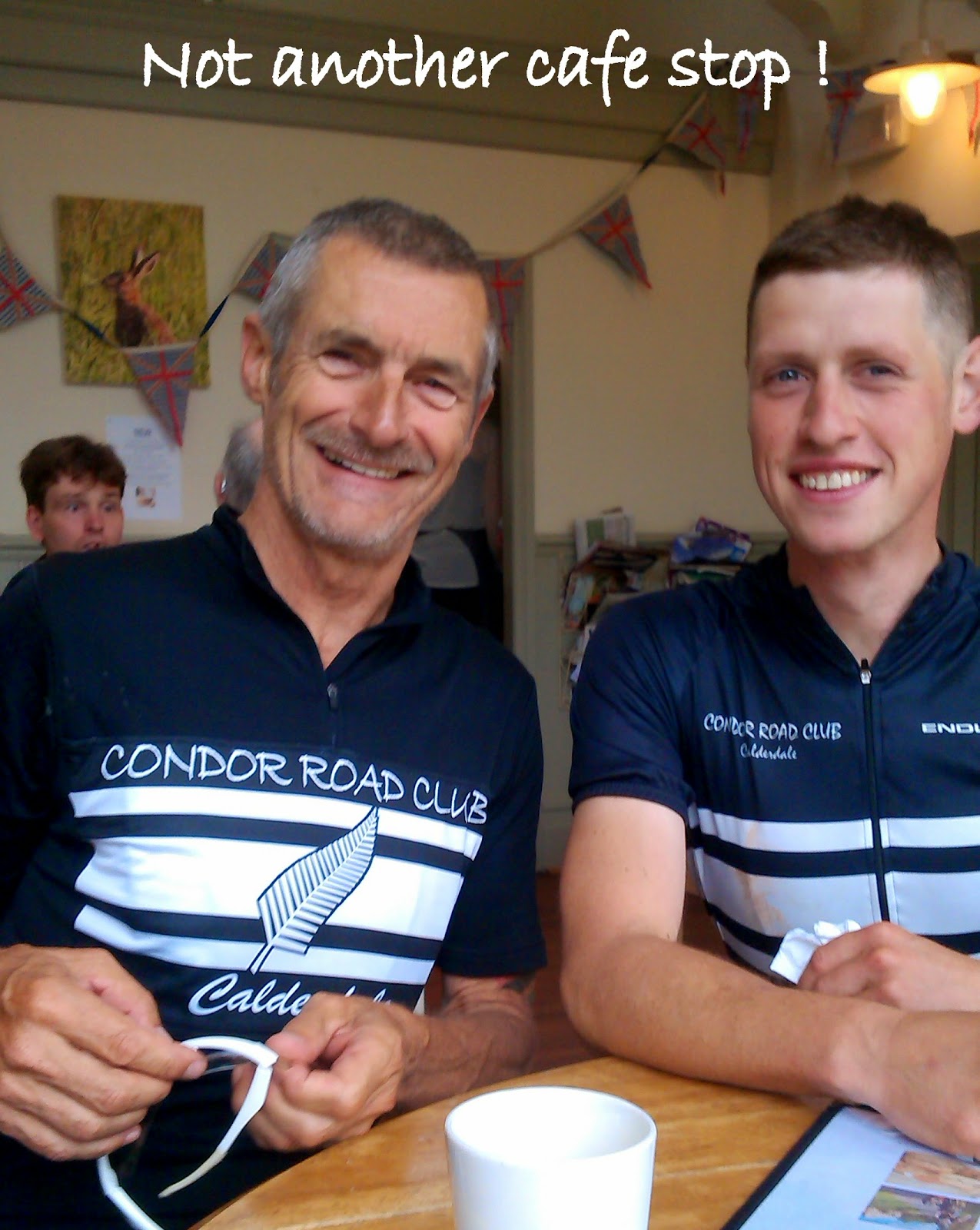 The Roaches were looking magnificent as we made way round the north eastern edges of Staffordshire and in to the eastern edges of Cheshire via the highest village in Britain, Flash. Then over Axe Edge; down the wonderful winding descent to Errwood Reservoir in the Goyt Valley and up to Oldgate Nick and on to Whaley Bridge and Eccles Pike. From Chapel-en-le-Frith Paul and Chris nursed me up Rushup Edge and down Mam Nick to Edale where tea was taken at the National Trust's Penny Pot Cafe (3 cafe stops in one outing - we must be getting soft !).  From there it was a short sprint back to Ladybower with clear blue skies and the sun on our backs.