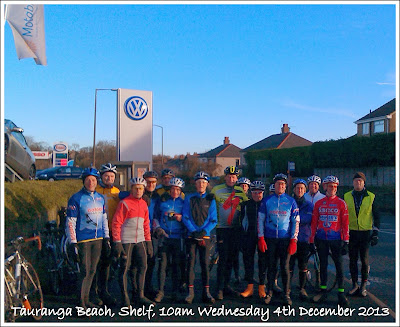 Smashing weather again today as we assembled at Shelf for a trip up the Dales, its a good job that the weather was conducive to standing around as we'd only got as far as the Yorkshire Building Society building on the Bradford ring road before Steve Stanger suffered his first puncture. Having been deserted by his neighbour he had to get his own hands dirty, but at least he wasn't short of advice. We then made our way to Shipley via Wrose and on to Esholt and up Old Hollins Hill to descend to Otley down the Chevin. A right turn at the bottom of the Chevin resulted in our 2nd delay as Neil had to scrape himself up from the road, fortunately he was more shaken than injured although his clothing wasn't so lucky. 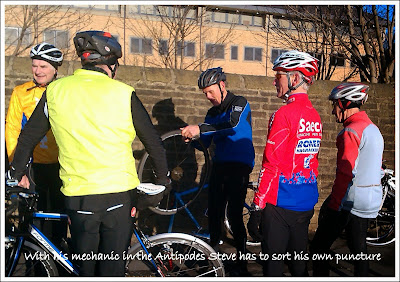 Between Otley and Bolton Bridge we made better progress although even then we had to soft pedal as Steve had developed a slow - he changed the inner tube again at the cafe but then managed to break the valve and came in the cafe, disrupting our lunch, begging for an inner tube (Paul, come back soon, he needs you). 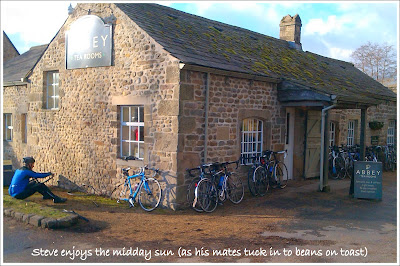 After the cafe stop the peloton split as a good half remembered urgent appointments at home taking the quicker route over Cringles and Ingrow whilst the rest of us followed Paul Gower over Addingham Moorside to Silsden and Keighley, then up the cobbles of Thwaites Brow and over to Harden, up to Hallas Bridge and then on to Thornton before joining the Great Northern Trail to Queensbury with JK, despite damaging a Look shoe plate whilst walking up Thwaites Brow putting in a fine performance up Station Road. 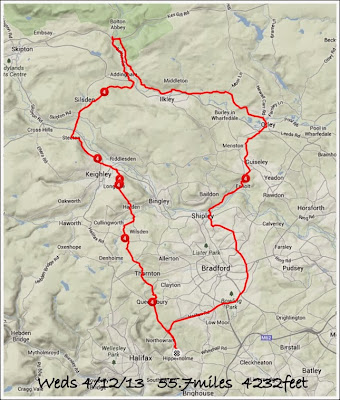 Should Boardman be allowed to say such things, see  http://www.cyclingweekly.co.uk/news/latest/541506/chris-boardman-mps-should-be-embarrassed-by-cycling-inquiry.html
Surely our elected leaders and policy makers know best.
Posted by petehorne at Wednesday, December 04, 2013