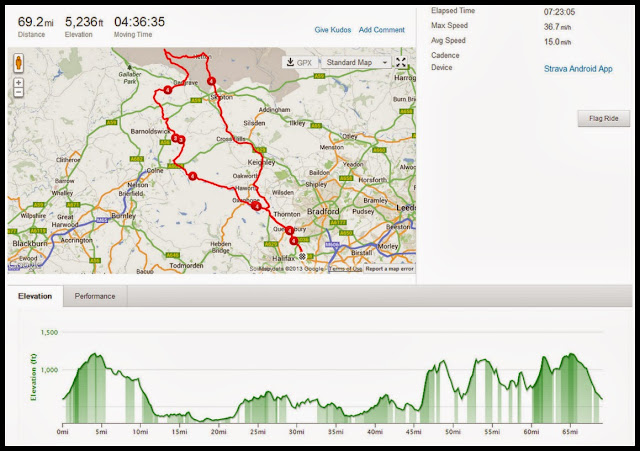 Todays Riders
Despite a poor weather forecast of mixed wind and rain, a good number of Condors showed up and decided to spread their wings. Was it the promise of a tasty cafe stop and the rumor of a warm country tavern for refreshment, that twisted their arms?? Of course not! We are seasoned athletes, its purely for the love of the sport!
The route was soon decided. Up around The Duck Pond to Airton, for breakfast, and a route back similar to the reverse of Spring Into The Dales, to take in the climb over The Herders and a cheeky drink at The Old Silent.
The Condor road train left Keighley, with a good steady pace, bound through Skipton, to Hetton and onto Airton. A favorable wind assisted with Autumn colors making the journey more pleasurable. Condor stomachs rumbled as we settled down to the usual good grub offered at Airton. With Malham Cove in the background, we were soon putting the world to rights and dreaming of new machines for next season carbon frames and electronic shifters, ( I was out of my depth!)
Rain started as we made a swift depart. Again I apologize for the lack of mud-guards and providing everyone with a free, backwheel shower. Skipping on towards Gargrave and West Marton the climb out of Earby seemed to drag on and up forever. Melvin winding up the pace as per like he does so very well!
Laneshaw Bridge soon came as Condors swapped and changed pace on damp roads, the first outing for many of our Winter machines. Of course, what goes up must come down and so with demon descents our 2nd stop was soon in sight. Tavern Time! We stacked our steeds up to gather around the welcoming open fire, each with our chosen poison. Tales of old and Condor heritage filled the air as Paul Daly joined us, (looking very dapper in new kit!)
Reluctantly, home called us away from the hospitality and climbs into Stanbury beckoned. Suitably oiled, we whizzed over the reservoir and with my new nemesis (Paul) spurring me on, "We're still with you Chris!" in my ear, climbed the last short sharp dagger.
We topped out, to regroup before splitting on Cock Hill. A good days riding was had by all. The perfect way to spend a Sunday with friends, whilst trying to maintain an ounce of fitness into Winter.