Only Condors on last Sundays club run were Big Phil and myself, we were joined by Irish John from VS. John made sure we didn't get cold as we were blown up to Cracoe and over to Thorpe then down to Burnsall Cafe. The weather forecast had been terrible so it was our intention to get back home before the rains came. After the statutory b & e buttie and 7 cups of tea we headed down the backroads to the east of the Wharfe to Otley then over the Chevin, through Esholt and managed to get to Shipley before the rain started. Undeterred we followed the canal bank to Saltaire then up the Moorhead climb past the golf course to Sandy Lane and Egypt before getting onto the Gt Northern Trail at Thornton to Queensbury. Home just after 1.30 with 70+ miles in and an afternoon shouting encouragement at the Brownlee's, a perfect Sunday, but where were the other Condors - don't be shy - share your tales of adventure on the blog.

I know where one Condor was spreading his wings, Grimpy was down in Staffordshire feeding his insatiable appetite for road racing with yet another category win in the LVRC Enville Road Race at Bobbington, his final preparation for the final of the Percy Stallard Series this Sunday.

This coming Sunday I've arranged to meet Simon at 9am at Hebden Bridge for a Seasons of Mists recce, a change of scenery from the Dales (we'll be up there next week to cheer Adrian on at the 3 Peaks Cross).  Big Phil will be missing as he's away in Tanzania altitude training up Kilimanjaro.  (see http://kilichallenge2013.wordpress.com/ ) and Paul Daly is in Spain riding the World Firefighters Championships - MTB Friday and Road Race Sunday - see http://www.mundialbomberos2013.com/pag-in/index-in.html .    Hope some of you upper valley boys will join us (and anyone else who fancies checking out Slaidburn Cafe. 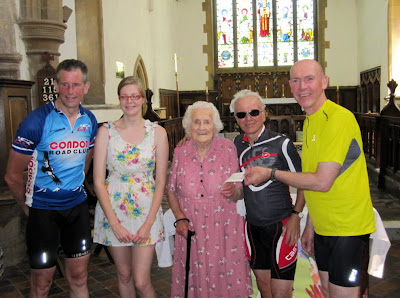