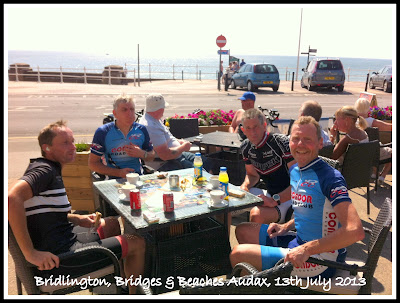 Myself, Damien, Oakworth Steve, Big Phil and Simon were joined at Stamford Bridge by Audax virgin and former Condor Mick Lever last Saturday for the 225k Bridges and Beaches Audax. It was about 24 degrees when we set off at 8.30am with a pleasant breeze coming off the North Sea. Mick and I did the first 8 miles or so at the front heading east through the Wolds towards Bridlington.  I was found wanting at the 1st real climb from Kirby Underdale to Uncleby Wold, dropping through the peloton and out of the back. Luckily for me my team mates soft pedaled and we were reunited over the brow of the hill but although working well together didn't catch up with moto 1 consisting mainly of Calder Clarion and Clifton CC. Brid was the 1st check point - obtain receipt from seafront cafe were the instructions on the brevet card  - Brid was looking Brill, so although with only 40 miles or so under the belt we chilled out over coffee and cakes relaxing in the sun taking in the sea air.
We then headed south through a network of singletrack back lanes to the Humber Bridge where we were required to obtain proof of passage. In the visitor centre car park we found a burger van and although we hadn't originally planned to have lunch the aroma of frying bacon changed all that - bacon and sausage butties and a large mug of tea sat on pick-nick benches in nearly 30 degrees of heat may not appeal to everyone but I can recommend it when half way through a 140 mile Audax.
After an unhurried lunch we crossed the Bridge and headed through the back lanes towards the next check at Gunness Bridge just to the west of Scunthorpe. On this section we were reunited with Mick and others who had lunched at a cafe at the south side of the Humber Bridge. A small team were taking turns at the front maintaining a comfortable 20-21 mph through the Lincolnshire flatland's with just the occasional maverick disturbing the well oiled machine. However Everest Phil, having done a good turn at the front suddenly blew, 30 degrees is not his favorite temperature, he functions best at minus 30 and began to suffer cramp which led to him dropping off the back. I dropped back hoping to pace him but he was too far gone and had to be nursed to the next control at Old Goole Docks where several pints of water and energy gels did aid him through the final 25 miles over Boothferry Bridge and back to Stamford bridge where Damien won a well timed sprint for the sign.
Another great day out, Damiens Strava stats showed 139.75 miles, 3825ft climbing at an average speed of 18.9mph. 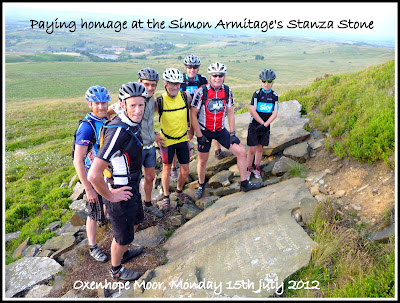 Monday evening mountain biking is continuing with a superb blend of fast tracks, technical single track and even the odd dash of culture. This week we were joined by  our President, Ian on a wonderful evening of sunshine and off-road speed. Paul took us through Shibden Park, Claremount, Plowcroft, Ambler Thorn, Keelham and Black Edge Road where in a change to the intended route we took the path on the edge of the moor to Fly Flat visiting the Stanza Stone en-route
It was then a fast pace round Cold Edge Dams through Wainstalls  and down the Cat Steps to Booth and following the water course to Luddenden then the canal tow path and Hebble Trail to finish up at the Steam Brewery Shed. 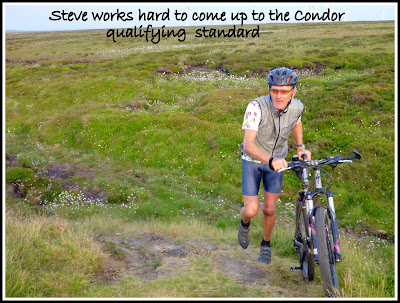 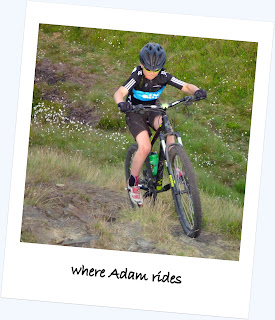 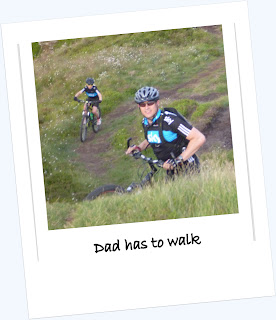