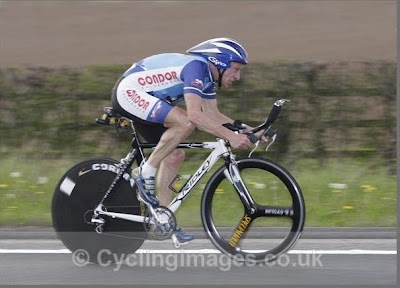 Results from our racing members are not easy to come by but whilst on the Wednesday Ride today I managed to extract from Brian that last Saturday in the Wolds RT 10 mile Time Trial somewhere over in the East Riding he set a new British over 70's National Record, recording a time of 21 minutes and a few seconds. Well done Brian, there's not many who can come home from a luxury cruise on the Queen Mary and within weeks win a national road race title and set a new national time trial record.

Not one to rest on his laurels, the following day he was riding the Tour of the Wolds LVRC Road Race in the Lincolnshire Wolds being joined there by Grimpy and Pete Smith. Pete finished 5th or 6th in his age group (o.60's) and the Condor took 1st and 2nd in the o.70's race. Brian tells me he put in an early effort as they approached the checkered flag in order to lead out National Criterium Champ. Grimpy but to his surprise (but no one else's surprise) neither John or anyone else came past and victory was once again his with John taking 2nd from former Ovaltine Professional and 1961 Tour de France rider Pete Ryalls.

Closer to home Simon put the finishing touches to his London-Edinburgh-London preparation by riding the Brimham Rocks 200k Audax where from all accounts he rode most of the event at the front, finishing with ease under 8 hours. Simon will be starting the 1418 kilometer LEL Audax at 6am this coming Sunday. He denies any ambitions towards registering a fast time but I doubt that the checkpoints will have to stay open late waiting for him. See http://londonedinburghlondon.com/ for further details.

I was relieved when others turned up at Salterhebble Locks last Sunday morning for the mountain bike ride, for a while it appeared I was going to be left alone to follow Paul Daly over some of the most errrrrrrr! interesting bridleways in the South Pennines. Never have I been more happy to see the Vicar on a Sunday plus Pauls mate Mark Warrinder. Although I was struggling, probably due to having overdone the miles in the previous few days, I really enjoyed following them on tracks up to Norland, Outlane, Marsden, Wessenden, Holme and Hade Edge - I have to admit to being absolutely knackered when I got home. Had I not committed myself to the Monday evening MTB ride I would have been happy to sit at home in front of the telly.