LEL News (and a bit more) 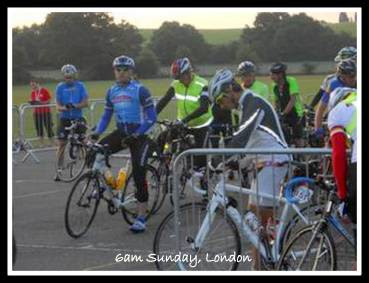 At the time of writing (6.30pm Mon) Simon is leaving the half way point (703.5 km) at Edinburgh for the return journey and, just like it is here in Yorkshire its raining very hard (to put it politely). Having started his journey at 6am Sunday he flew north at an impressive speed and stopped off near Scotch Corner (about 450 km) at just after 11pm for a well earned rest and a little sleep. At 5am he jumped back on the bike and set off for Barnard Castle but did'nt get far before he had his first p...... and managed to empty two CO2 cannisters without inflating the new inner tube.  Once he was sorted he embarked on a difficult ride over Yad Moss to Alston and north west to Gretna and Moffat before picking up a bit of tail wind (and a lot of rain) over the Devil's Beef Tub towards the half way check. He's been riding most of the route so far in company with Bob Johnson of the VC167 club but Bob's booked in for a sleep 40k south of Edinburgh. Buoyed by an optimistic weather forecast for the evening Simon's hoping to plough on and get to Yorkshire before resting - sounds a bit ambitious to me but I suppose it will be downhill all the way back to London.
All the best Simon - Dig In. 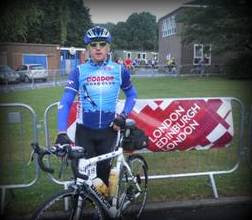 Whilst Simon was engaged in more serious riding, Oakworth Steve was testing himself in the Bronte Sportive (he was impressed to find a bottle of water and a tube of toothpaste in his finishers goody bag) and Brian, Pete Smith and Peeps were road racing down near Chester (no results available), a small group enjoyed a club ride up into the Dales. I met Paul D at Denholmgate where we waited for Grimpy who I understood would be coming with us as part of his build up to the impending Haute Route Alps, he didnt arrive so we set off and were joined en-route by Richard, John, a former colleague of Paul's and 'Fletch', from Oxenhope. John and Fletch said their goodbye's at Kettlewell as we three attacked Park Rash. With a tail wind it wasn't nearly as hard as its reputation suggests and in no time we were racing down Coverdale, West Scrafton, East Witton and the most expensive bacon buttie I've ever had at Jervaulx Tea Rooms (it was good though - so was the flap-jack).
Once refreshed we attacked the head winds over Leighton and Grey Ridge, a stretch of road where the Gods dealt the Vicar a penalty for not observing the Sabbath. Three punctures - the 3rd occurring at the top of the descent down to Lofthouse. Paul and I had stopped at Lofthouse thinking that Richard had just slipped a little way off the back but with his non arrival we had t ride back up that 1 in 4 climb to find that he had had to stick a patch on one of the punctured inner tubes having no more spares (how many of you still carry a puncture repair kit).
Anyway the patch did the trick and we made our way home up Greenhow and down to Bolton Abbey where Richard stopped to put a little more air into his tyre. Paul and I continued our way anxious not to be late for tea, both having guests at home. The heavens opened at Addingham and thats more or less how it stayed most of the way home, at least it was warm rain. Richard, did you make it home before dark?


Yes made it back to Keighley without having to put anymore air in the tyre. Glad I didn't park at Denholme as I was starting to fade by the time I got back to the car. Good day out though
Posted by petehorne at Monday, July 29, 2013