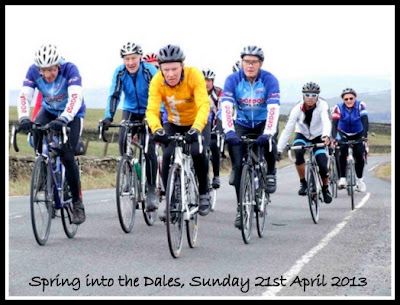 Sounds like it was a good day at the Spring into the Dales even without the usual flock of Condors soaring over the mountains. As can be seen above Paul and John were at the head of the bunch but it looks like the Imps's Paul Hickey was handing out some pain. Lumby's now gone off to France for a couple of months recuperation. Mr Gower turned up for the Wednesday ride but was still suffering from Sunday's efforts and limped home alone after lunch. 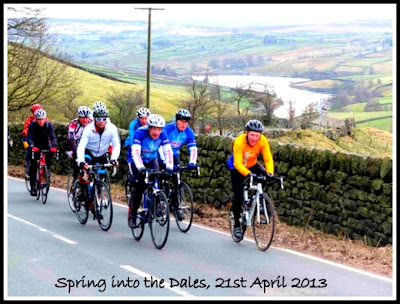 Thanks to Dave Dodwell & John Sutcliffe, CTC Calderdale, for the photos

A good attendance for Wednesday's ride, we headed for Rascal's Cafe, on the waterfront at Knaresborough
via Weardley and Follyfoot and returned via Knox, Penny Pot Lane, Norwood Edge, up the Chevin, down through Esholt with a sting in the tail when Paul Daly made us go up the Golf Course climb from Saltaire.

Its CTC Calderdale's Red Rose Ride 200k Audax from Halifax on Sunday, I know Mel and Simon are intending to ride it but myself and Big Phil are over in East Yorkshire taking part in the Fat Rascal Ride, a charity event starting at Betty's in York and visiting Betty's Tearooms at Northallerton, Ilkley and Harrogate, Phil tells me we are to be fed limitless amounts at each of these establishments but he may have just been trying to focus my interest (it worked).

Last Mondays inaugural mountain bike ride went well with 7 attending for a ride taking in Cromwell Bottom, Southowram, Beacon Hill, Claremount, Shibden, Pepper Hill and back through Judy Woods and Bottom Hall to round the evening off at the Cock o' the North Shed at Hipperholme.
Meet at 6.30pm again this coming Monday - meeting place not yet decided but will be blogged on Sunday.

I'm putting in a Condor team kit order in the next week or so, please let me know if you want some new kit, e-mail me at petehorne@yahoo.co.uk or tel.07549821349 or just come out for a ride and tell me. Have a look at the Endura web site and you can see whats available.
Posted by petehorne at Thursday, April 25, 2013