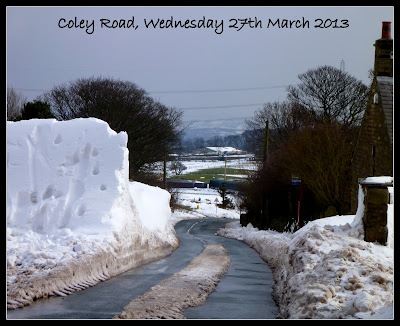 Despite it being Spring, temperatures being above freezing (just - if you ignored wind chill) and most roads now being open only five turned up at Shelf roundabout for today's ride. In deference to the blizzard that was raging at 10am our ambitions for the day were modest and Otley was chosen as our destination, we took a fairly direct route there round Manningham and Esholt and would have been sitting in a warm dry cafe before 11.30 had some twerp not suggested adding another mile or so by going to Cock Pit Farm at Weston. Unfortunately the cafe was still operating its winter opening times - Fri to Sun only (from next week it's Weds to Sun but that failed to deflect the abuse I received). 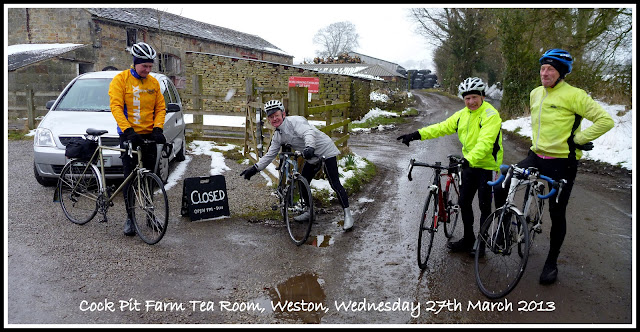 Anyway it may have been a blessing in disguise as it was far too early for lunch so we rode up to Bolton Bridge cafe and enjoyed our break at a far more sensible time and with the bonus of a few more miles in the legs the bacon tasted so much sweeter.
The weather forecast had predicted better weather post meridiem but this was not the case so we took the easy option and returned via Cringles and Ingrow.  Fifty plus miles in and home in time to watch Cav take stage 2 at De Panne.
Posted by petehorne at Wednesday, March 27, 2013