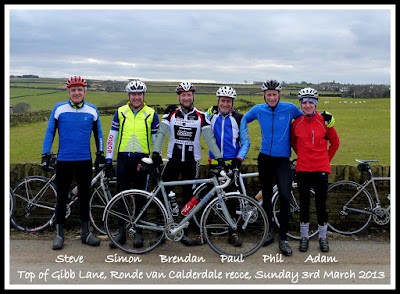 I knew the Ronde van Calderdale route wasn't going to be everyone's cup of tea for a lazy Sunday in early spring but as Paul Daly was unfamiliar with some of the route (especially the Colne Valley bit) and on my recommendation has invested £20 of his hard earned pension on an entry I had promised to show him the route and with dry weather forecast today was the ideal opportunity.
Regular Condor club run stalwarts Steve, Simon, Paul, Phil and myself were joined by 3RT's Brendan Devlin and one of the top Calderdale fell runners Adam Breaks. This proved to be a great group to ride such a challenging route, as you can see from the above photo we were all still smiling even at the top of Gibb Lane, the positive attitude prevailed throughout the day.
A tail wind made for a brisk start up through Rastrick, on to Outlane and down Forest Hill Road and then we hit the first 'Ronde' style climb of the day, Penny Hill. For the second week running a fell runner gave us a demonstration of that genre's climbing prowess (Karl Gray last week in the Imps ride), as Adam romped away chased by Paul - never one to submit to youth without a battle. We regrouped at Krumlin and enjoyed the tail wind up to Buckstones and a long steady descent down to Pole Moor.
The Colne Valley climbs came and went in similar fashion but never uncomfortably competitive (I think there had been an unspoken agreement to save that for the actual event). Lee Lane (aka Shibden Wall) was probably the most difficult climb so far due to the cobbles being too greasy for out of the saddle efforts, and I was quietly pleased to witness Adam having an attack of cramp to his calves. We continued the route through Ovenden Wood, up Gibb Lane, down to Luddenden and up Old Lane towards Midgley. Here we deviated from the route and went down to Sowerby Bridge Station where we lunched at the refreshment rooms - 1st time any of us had been there - very good - a fine selection of real ales as well as bacon and sausage sandwiches and large mugs of tea - with thoughts of Trooper Lane ahead we stuck to the tea and butties. Steve headed off home to Oakworth from here, Adam had left us earlier, the nearby pull of his home at Wainstalls being too strong to resist.
The cobbled climbs of Woodhouse Lane, Wakefield Gate and Exley Bank went past almost without notice as minds concentrated on the forthcoming coup de grace, Trooper Lane. With Adam gone Paul made it known from the very start that this was to be his climb, I was in no position to argue but Phil put in a spirited effort only to falter by taking a breather just before the summit by turning onto Blaithroyd Lane for several seconds, I had to explain to him that this was akin to a foot fault and he would have to be disqualified from his 2nd place but I'm not sure he accepted this entirely unbiased decision.
A good day out, hope the actual event (7th April - pre enter via BC website) is half as enjoyable.