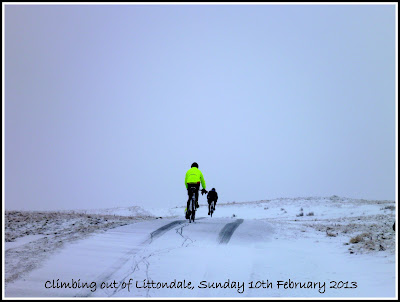 Despite challenging weather conditions four of us met at Denholmgate for the 'B' run, Big Phil, Paul Daly, Richard and myself. A tail wind saw us make the 42 miles up to Halton Gill in fine style, the roads were clear, no dangers from black ice and occasional signs that the weather may improve. On climbing the side of Plover Hill towards Silverdale the weather did deteriorate somewhat although the snow on the road was  slushy rather than frozen. 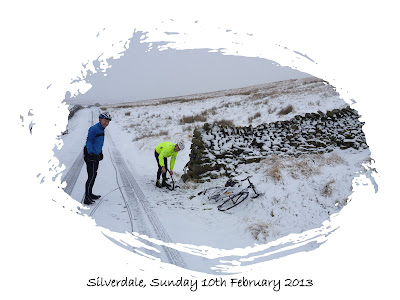 It may not have been Pauls best ever day on a bike, puncturing on the Silverdale road in snow when the temperature is minus 3.5 wouldn't have been at the top of his list of fun things to do in retirement, neither would breaking a spoke or wearing out his brake blocks but hey! in every life a little sleet falls and at least the main worry didn't materialize - that of the 'A' team may catch us up before the cafe. 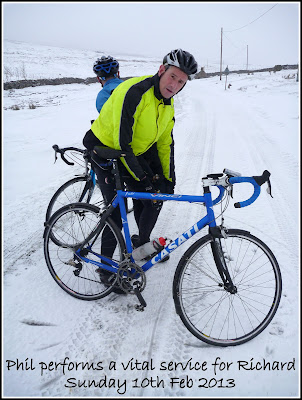 We had just settled in the Naked Man cafe at Settle (minus Richard who showed his mettle by carrying straight on) when half the 'A' team arrived - Mel, the other half, former Condor, Dougie Burnside, arrived a little time later looking shell shocked after being thrown from his mount twice over Silverdale but after a coffee and flapjack he was his usual happy self - it was good to see him slumming with us unsponsored riders.
Once refreshed the A's and B's made our way home together at a brisk pace despite head winds. I managed disguise my distress as I did my turns at the front with Mel, but, and I may be wrong in this, it appeared to me that Paul was making the fatal mistake of not allowing Mel to dominate the pace at the front on the all too frequent inclines. I was also relieved to see that Dougie was not his usual self on the climbs although he was eager to make up for this shortfall on the flat.
Mel said goodbye at Kildwick and the rest of us worked in turn on the road to Keighley, although Paul, a man who never shirks hard work, didn't come through with his usual enthusiasm. Uncharitably I assumed he was keeping his powder dry for Ingrow.  I couldn't have been more wrong, we singled out with me doing my turn at the front at the bottom of the climb and there I remained until the last bend when Phil came past to immediately drop me (who was it who said he couldn't climb without the aid of a bottle of oxygen)  I turned round and to my surprise saw that both Dougie and Paul had gone. Dougie was next up with Paul a couple of hundred yards further back - the unthinkable had happened, Pauls legs had gone - he too has human frailties.
From hereon Big Phil's strength and enthusiasm appeared to increase more and more as the weather conditions deteriorated more and more, he was reveling in it - head wind and cold wet slushy snow battering your eye lids, it must have reminded him of last years holiday at the summit of Everest, in fact before we split up we both agreed that it had been the best day's cycling for ages.
Posted by petehorne at Sunday, February 10, 2013