Our annual dinner and prize presentation took place on Saturday evening at Bailiff Bridge Community Centre. We were delighted to welcome Chris Crossland as guest of honour, Chris told us how he first started cycling and how he became involved in the CTC and Audax both as a rider and much respected event organiser. Paul Gower, in his own inimitable style, welcomed the guests and our president, Ian Robinson announced the prize winners, ably assisted by JD Smith, trophy's were presented by Chris.

I apologise for the quality of the photos, my compact seems unable to cope with indoors photography. 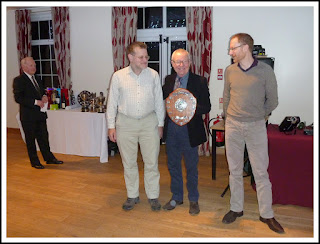 Off-Road Trophy - more names vying for this trophy than any of the others - Adrian Lord, Richard Burnham, Steve Cavell & Robin Holt. But the winner is the only person it could be, the dominant force in his age group in the UK - the 2012 World Champion  John Ginley - who only a couple of days earlier took the 2013 silver medal in the UCI Masters World Championships in Louisville, USA, to add to his gold medal at the recent British Championships plus his age group win in atrocious conditions at the classic 3 Peaks Cyclo-Cross, the hardest Cross in the world, and many more outstanding performances in 2012. 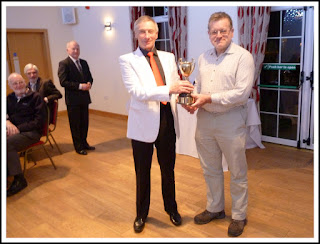 25 Mile Time Trial Trophy - This is the only time trial trophy to be awarded this year, it goes to the 2012 Veterans National 50 Mile champion (I believe its the 3rd time he's won at that particular distance). He was also the bronze medal winner in the national 30 mile championship and a standard winner at several other time trials despite the new rules which favor younger riders, and is still the man they all wait for to make the decisive moves in age related road racing, it is of course the man who has won the trophy for an astounding 29th time, Brian Sunter. 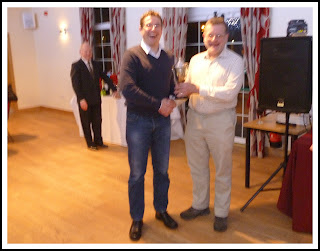 Road Race - A new name on this trophy for 2012, a man new to racing who won his first race at the beginning of the season and put in a solid season riding road races and flying a lonely Condor Road Club flag in British Cycling events, one of the few non veterans we have in the Condor and an enthusiastic Audaxer and supporter of the Sunday club run, Simon Fortune. 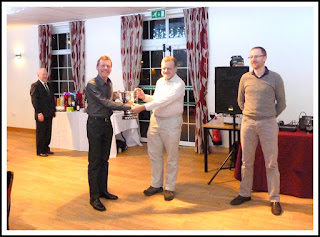 Audax/Sportive - Greatest total distance in organised non-competitive events.  Thats me (with Mel 2nd although I concede he may have achieved a faster average speed). 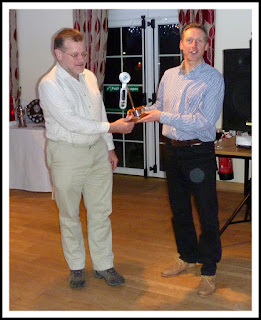 Swinging Crank - This wasn't awarded last year - no one came up to the required level - but in 2012 we had the fastest rider in the Condor, a lifelong cyclist who, although now in his 50's is enjoying great form, who has achieved outstanding performances (frequently recording fastest times - although we must remember that they are not races) in classic Sportives such as Etape du Dales and the White Rose and Audax's such as the North West Passage, Spring into the Dales and Season of Mists and he's been mixing it with the best in age related road racing and the occasional enter on the line time trial, but has somehow managed not to be good enough to win any of the other club trophy's - Melvin Hartley. 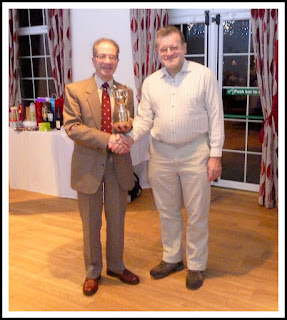 Clubman of the Year - The loudest applause of the evening went to our Clubman of the year, voted for on the night by club members it went to the ever youthful, hard cycling and hard working Paul Gower. 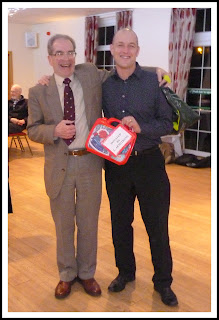 Raffle - Unfortunately the star prize in the raffle was taken by a VS Cycles' rider (but formally a Condor so that did ease the pain) Mick Lever
Posted by petehorne at Sunday, February 03, 2013