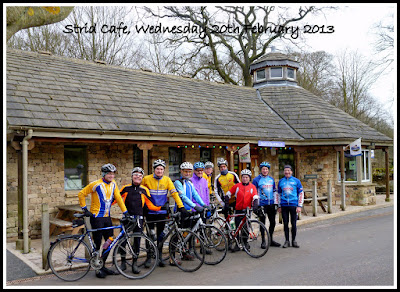 A cold and damp east/north easterly wind was blowing today but although the skies were grey at least it was dry. To take advantage of a helping wind on the way home we headed out to Wharfedale where the weather was several degrees warmer with occasional blue sky breaking through the grey.  Peeps had come up with the idea of trying the relatively new tearooms at The Strid and it turned out to be an excellent suggestion. For some reason I hadn't expected it to be as good as it is; warm spacious and welcoming it will no doubt become a regular Wednesday venue.
The return journey was made over Eastby Brow which, as planned, was made far easier due to the tail wind and always worthwhile for the stunning views from the summit. All was going well up Ingrow with Paul D setting just the right pace, but unfortunately JK became possessed with that uncontrollable desire to inflict pain, it afflicts him each time he hits Hermit Hole Bends - after breaking up the peloton he died, but it was too late, the adrenalin was now pumping round Peeps legs and he attempted to finish off what John had started, all to no avail however as Paul D reigned supreme as King of the Tip Top.

Sunday 24th February
Its the Imps Reliability Race Ride this Sunday, sets off at 9am from outside the Ritz in Brighouse but you will need to get there at least 15 minutes earlier to sign up - £2 - bring correct change. Basic details for the long route route can be seen on the Imps Blog (link from this blog).
Posted by petehorne at Wednesday, February 20, 2013