We did meet outside VS cycles as planned, but the shutters were down on the shop and a chill breeze drove us along the street to find shelter. So instead of drooling over the latest carbon fancies in the bike shop, we had to make do with second best and admire the lace in the window of 'Brief Encounters' ladies lingerie instead. 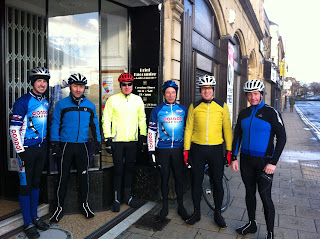 Pete Smith joined us shortly after the photo-op, reporting that 'just two lads' were to be seen at the Ritz.  They would be coming our way and would surely catch up soon, so we pottered on and I grabbed the front to keep the pace under control - a move that worked very well, for a while. Through Huddersfield and in short order we were scouting Holmfirth for suitable (open) cafes. Emma's tearooms provided refreshment, but sadly won't be appearing in my forthcoming 'Guide to bacon & egg butties of West Yorkshire'.  The tea was nice though, and at least the lightweight sandwich didn't hold me back too badly up the back road to Upperthong.

Padiham Chris thought we should all stop to enjoy the view from the top of the hill and let the fierce, scouring wind cool us off after the hard ascent, while he changed a front punture. Turning on to Isle of Skye road propper, Brian marshalled the troops to do sensible turns. Chris evidently wanted to study the scenery some more, this time with a rear puncture. Only Brian stopped to keep Chris company while he battled with home-made mudguard attachments, the rest of us being ignorant of his plight. Richard B eventually turned back to investigate while we sheltered in a shallow dip. Declaring all was well (or at least as good as it was going to be), we were released to press on into the slight draught/whiff/zephyr. Having done my turn at the front, inevitably the elastic just stretched too far on the next rise. Fortunately, I could then get the benefit of extra training alone without the inconvenience of my four clubmates to shelter behind. Names have been added to the book, should I ever get fit enough again to return the favour (unlikely at this rate).

They did eventually wait though down in Upper Mill, letting Brian & Chris catch up too, which took us slowly on to Denshaw and up & over 'windy gap' at Jn 22, where at last a decent tailwind made for a great run down the valley, to be met by many colleagues in the Works. Our cycling bretheren had turned up much earlier and selflessly waited nursing half-a-pint for our belated arrival. They then stayed sociably with us, and some even had another pint on the table as the main riding group had taken their restorative tonics and headed off for home.
Posted by Ian Robinson at Tuesday, January 01, 2013