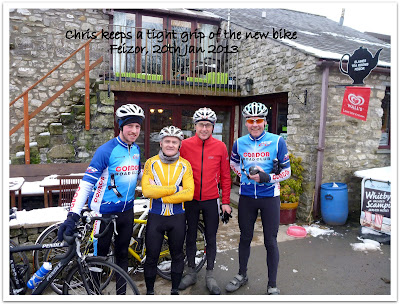 I was both surprised and relieved when I looked out this morning and saw that it hadn't frozen overnight, perhaps Feizor was now more of a possibility than it appeared yesterday. I hung around at Denholmgate till a few minutes after the published 9am meet but no one else arrived so I made my way Keighley where I met Mel at the bottom of Ingrow. We noted Padium Chris' bike was resting outside the cafe and pottered on to the roundabout where we were eventually joined by Sean, Simon and the aforementioned Chris, now dangerously re-fueled. 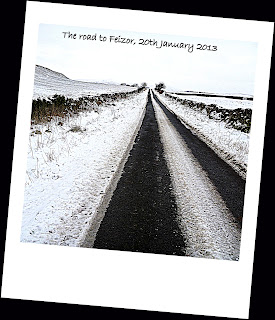 We made our way on the backroads to Broughton and towards Gargrave. Mel, Sean and Chris were keeping 22mph going up the rises, I was found wanting on the first of these rises and watched the above trio disappear into the distance. Simon, perhaps a little hampered by the mountain bike tires on his hybrid bike hung back to keep me company but decided to turn at Gargrave whilst he was still feeling strong - after witnessing his condition in the latter part of last weeks ride I dare not attempt to change his mind.
I made my way to Feizor by riding straight up the A65, not a route I normally take but, alone, with lighter than normal traffic, it proved to be a good choice.
The hard men got to the cafe about 30 minutes later having ridden a somewhat longer and harder route; Airton, Attermire, Settle, Helwith Bridge and Austwick. I quickly finished my sweet course thinking I could sneak off whilst they were still at the trough - trouble is they don't appear to eat much at all and on seeing me make a move they donned helmets and came with me - or to be more precise I sat on their wheels as they did bit and bit, until I finally said goodbye (or would have done if I'd had breath to spare) coming out of Hellifield. I was pleased to get 83 miles on the clock when I got home (just before 3pm), if I can steadily increase that each week till the NW Passage I will be more than happy.