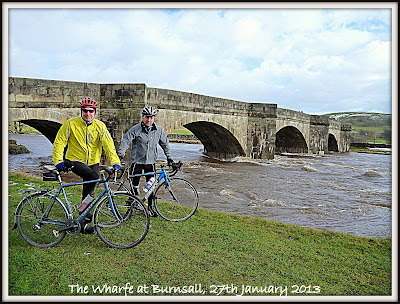 A tempest of biblical proportions was raging as I left home for today's club run, if the weather forecast hadn't sounded so confident that after initial rain it would brighten up and the temperatures would soar to 6 or 7 degrees I may have considered giving it a miss. I was sure no one else would venture outdoors in this weather but I was wrong, soon after passing through Queensbury, four VS's, Chris, JD, Eric & Martin came storming past me,  I momentarily caught their rear wheels but couldn't stay the pace and was spat out of the back - being dropped on the way to the start was not the perfect beginning to the day. We all re-grouped at Keighley being joined by Richard, Sean, Mel, Pete W and Oakworth Steve.  Mel was of the same opinion as me, that, considering the encouraging forecast we ought to venture to our stated destination, Burnsall, via Cringles, Kex Gill, West End and Greenhow. I volunteered to lead the Z team whilst the A team shot off up the road without glancing back. 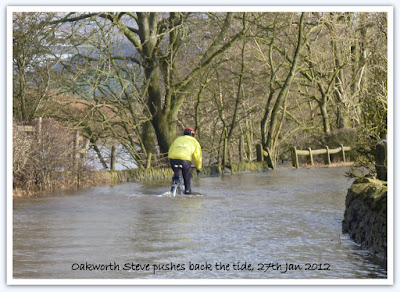 I'm not sure if it was intended or if he just missed the boat but Richard hung back with me as we watched the fast lads disappear into up the road. We saw in the distance that Steven was being shed from the fast lads peloton as they approached the summit of Cringles and he looked happy to join the Z's on the descent to Addingham, but in truth never really recovered from the trauma that had been inflicted by his earlier efforts. 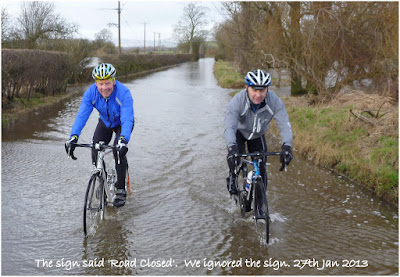 The three of us kept together over Kex Gill, West End and Greenhow as we were buffeted by high winds and blinded by hail, we even had to work hard going down past Stump Cross Caverns and hit deep water for the 1st time on the road to Hartlington. I was more than happy to reach the cafe at Burnsall where we found the A team tucking into their baked beans. After loitering there some time we made our way back to the security of Calderdale via Thorpe and Gargrave hitting more flooding on the road from Broughton to Carleton - did you return by this route Mel?
78.2 miles at an average speed of 13.2 mph, not very fast was it,  I can assure you we hadn't been taking it easy but we had enjoyed a memorable day out.
Posted by petehorne at Sunday, January 27, 2013