Turnout was down to six; in fact when I first looked out of the window on Sunday morning, saw it was pouring down and then received a text from Simon giving his apologies due to illness I could have been tempted to stay dry and warm myself. However as Big Phil was calling en route to Denholmgate I donned my cycling kit plus my winter weight rain jacket and was somewhat surprised when opening the garage door I was met with blue skies and even a weak sun. Things were looking up, Phil told me he was not feeling all that great himself so that gave me another boost so, after removing my rain jacket, we were away, battling strong gusty winds over to Keighley collecting Richard on the way. After collecting Mel, Chris and Mr Oakworth (I'm sorry to be so rude but I don't know your name), we had a free ride on the Paul Milnes train towards Skipton. I was feeling very happy, almost effortlessly gliding along behind a large group being towed into a stiff headwind. 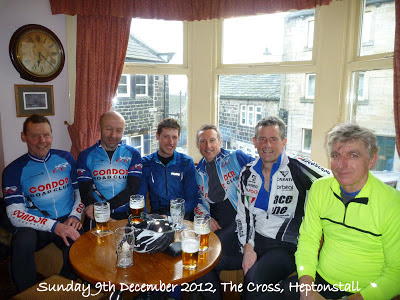 However Melvin's legs were becoming twitchy, he just couldn't cope with an easy ride so we turned left at Vietnam Bridge and fought the winds ourselves through Carleton, Broughton and Bank Newton. We then proceeded in a southerly direction passing through Horton, Barnoldswick and past Fanny Greys to Barrowford, where, much to Richards delight and relief, we took elevenses at the Heritage Centre (note to Ian - you need to be there before 11 to have bacon included - we had failed by minutes and the boss would not deviate - rules are rules - having said that I must add that it is a good cafe).
Once fed and watered we followed Mel on a direct route through Colne, up Church Clough to Coldwell and  over Widdop and a refreshment break at Heptonstall.
Not a drop of rain all day, reasonable temperatures and a good route made me wonder why I'd ever contemplated going back to bed.

Next Sunday Chris and I have signed up for the Winter Solstice Audax - I understand that entries have now closed so if you haven't got your entry in its too late.