Grimpy's trip down to Warwickshire last Saturday was rewarded with another jersey to add to his collection of National and World Champions garments, that of the LVRC over 70's National Cyclo Cross Champion. I understand that it was not easy conditions. Much of the course was in deep mud, with a 100yds steep run up each lap — the descents were really tricky, with riders sliding all over the place, but with out any form of accident, such was the skill shown by some of the most experienced riders in the sport.

John took the title from former multi national and world champion Mick Ives. A great confidence booster as January approaches, when he will be crossing the Atlantic to defend his World Championship title in the USA.

As John was basking in glory in the Midlands a small group of us were battling the winds and squally showers nearer to home. The planned route over Sutton Moor was cancelled and a lower level alternative was chosen. We were joined by Paul Milnes and Des Fretwell up the Aire Valley and over to  Cracoe where we turned right towards Thorpe with the intention of visiting Burnsall Cafe. However Des informed us that the Burnsall staff are taking their winter break so we did a left at Thorpe and made our way to Hebden via Grassington. 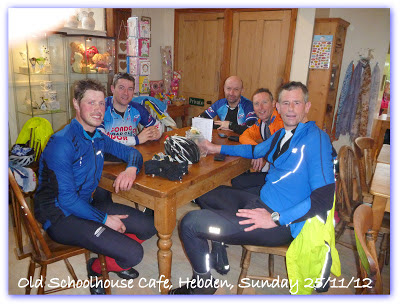 An excellent alternative choice, we were warmly received and fed with as good a bacon, sausage and egg sandwich as you are likely to get anywhere. I cannot deny that it was a wrench to leave the establishment but the weather was taking a turn for the better as we made our way down Wharfedale through Appletreewick to Bolton Abbey where, with the temperature rising and the sun attempting to push its way through the clouds we stopped to remove outer shells. It was straight home from there, over Cringles and down to Silsden where Mel took a left to practice his hill climbing on the Robin Hood. With Mel gone some of us may thought that we were going to have a nice steady ride back through Keighley but Chris had other ideas as he came to the front talking lovingly about his new 55 tooth chainwheel - how good it must feel to be young.
Posted by petehorne at Monday, November 26, 2012