Thanks to John Sutcliffe for the below Seasons of Mists photos 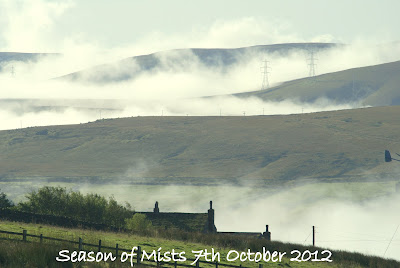 Great day out at the Season of Mists and good to see so many Condors at this Audax. There were about 120 riders at the start of the 100k route so I decided that the best plan was to get to the front as soon as possible and avoid getting balked by the masses.
I got through Heptonstall well placed but at the top of the cobbles a small group including Mel, Graeme Brown and VS's Chris and Alex were forging ahead, Robin almost missed the boat and did well to jump across. I was joined in the second group by, among others, Simon, Pete Smith, Chris Sylge, Dan from Pedalsport, Hebden Bridge butcher Dave Woodhead and Martin from VS. We picked up Pete Whiteley, who I presume had been spat out of the back of the leading group, just after Blackshaw Head and were making good progress round Burnley and up to Fence. On the Ridge just before Sabden Chris punctured so Simon and I waited in case he had problems. As we were changing the inner tube Peeps, Brian and Ian passed by followed by Hoppy who was riding with a Greetland fell runner. 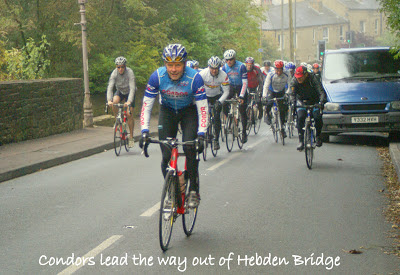 Once moving again we collected Hoppy at the start of the Nick o' Pendle climb and came across Brian, Peeps and Ian just before Clitheroe where Brian was struggling to sort a stiff link. From there we rode on together to the Waddington control where Pete Smith was waiting to join us.
From Waddington I had the dubious pleasure of riding with Peeps on the front of our grupetto over the long steady climb over Newton Fell. I hadn't been aware at the time but Ian went off the back followed by Brian who was having one of his very rare off days (the previous weeks de-training tour had obviously done what it says on the box).
The rest of us rode together through Slaidburn and Grindleton to the cafe at Downham where we found Brian. He declined to break bread with us and set off alone over Pendle where I understand he caught Ian. We loitered at the cafe enjoying the autumn sunshine and drinking tea and thinking how lucky we were to be enjoying such a great ride on such a perfect day. 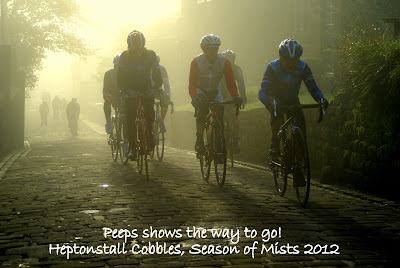 Once refreshed we made short work of the hills over to Roughlee and Nelson being re-united with Ian at the Coldwell Tearoom check, Brian having ridden on alone. Riding up the Widdop climb from Thursden we were careful spread across the road hoping for a good team photo but unfortunately the mists had played havoc with camera sensors and many of the days photos were spoilt (luckily for Brian whom I understand was clicked walking this hill). Thanks once again to Chris Crossland and his team from CTC Calderdale.

AGM.
Not a massive turn out for the AGM but there wasn't a lot to discuss. Ian has stood down from his position as Secretary and I've stepped into his shoes as he takes over the reins as Club President. The Club Dinner will be at Bailiff Bridge Community Centre once again but note a change from the usual date. In 2013 it will be held on the 1st Saturday of February - a week later than usual - more details to follow.

Condor Cross
The Cross will be at Welholme Park again on Sunday 28th October. Helpers required. More details to follow.

Sunday 21st Oct
We're riding south for a change this Sunday, meeting 9am, Brighouse (bottom Hudds Rd) for Glossop and the Snake.