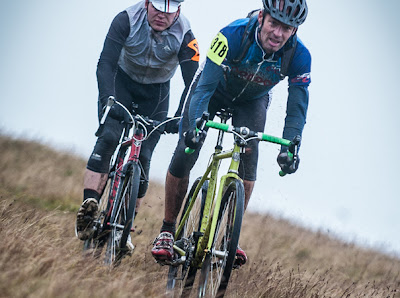 Hats off to all 3 Peaks riders last Sunday, just to get round was a great achievement. I was pleased to see that Grimpy got the over 70's title but goodness knows how he must have been feeling setting off on the Autumn Tour the following morning. I rode up there with Melvin and the VS lads and took a bit of a hammering going off the back on the climbs, grovelling to get back on and then repeating the process several times. After an early lunch at Feizor Cafe we went up to Horton to spectate, the weather conditions up there varied between heavy rain and very heavy rain. Mel and the VS's retired to the Helwith Bridge Inn whilst I stayed in Horton getting wetter and colder. A couple of fellow spectators, Paul Daly and Dale Goodwin both offered me lifts home and I was sorely tempted but resisted. On my return to Helwith Bridge the others were just setting off back and I said my goodbyes as they glided off into the distance on the hill over to Stainforth.
By Settle I had warmed up again and with a tail wind I took the Attermire road over to Airton and down to Gargrave.  Suspecting that the usual route home through Broughton and Carleton may be flooded I made my way through Skipton and came across Mel and the lads just joining the main road at the Cononley junction. I wasn't with them long though, going off the back on that Hors Cat climb past Airedale Hospital.
I know how relieved Robin, Adrian and John must have felt at the finish of the Peaks - I was feeling pretty much the same on getting back to Hipperholme.
Hope to see a good turnout at the Season of Mists on Sunday.
Posted by petehorne at Thursday, October 04, 2012