Sadly I must report that our old club mate John Berry died last Friday, in hospital, in Huddersfield. John, who was 79, had not been in good health for a couple of years and had been living in sheltered accommodation in Elland. He had been admitted to hospital a week earlier suffering with shingles, pneumonia  was given as the cause of death. The funeral will be at Park Wood, 11.15am Tuesday the 6th of November. 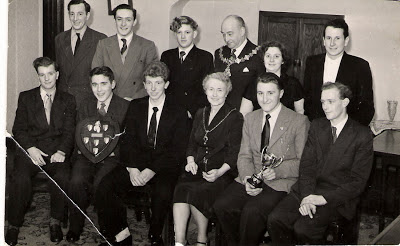 John joined the Condor Road Club in 1950, shortly after the formation and is easily recognisable in the above photo taken at the 1952 club dinner at the Royal Hotel, Brighouse (top right, stood behind Gordon Turner). I first knew John in the early 70's as a regular on club runs and and a reliable helper at CRC races and time trials. His bikes were always immaculate and frequently replaced (most of Tony Parrish's stable being originally owned by John). His racing career was more or less over in the 70's but I do have a vivid recollection of John riding the Otley 12 hour on the 12th of September 1976. It was a pig of a day, trees were being blown down and roads were being blocked and it was also the coldest September day that I can remember. Of the 94 entries only 28 finished the event (even B.Sunter was dnf!), one of the finishers being, of course, John, who just missed being third counter in the winning Condor RC team by 1.6 miles to Allen Cooke. I remember John telling me months later that he was still unable to fully open his hands, not having recovered movement after 12 hours clenching the handlebars - happy days - R.I.P.
Posted by petehorne at Wednesday, October 31, 2012