Four made today's club run to the Clarion Tea House, a ride up the Heptonstall cobbles soon warmed us up and a tail wind ensured that we had a fast ride over the Long Causway and through to Fence, we were at the tea house well before 11 o'clock enjoying pint mugs of tea. 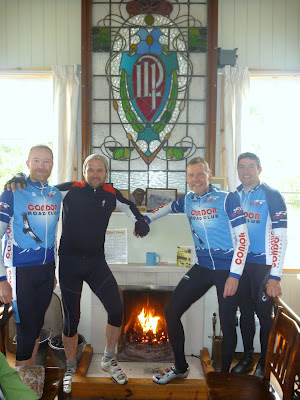 Being young Simon had been able to plan ahead and had some nice squashed sandwiches in his back pocket, Ian and Steve had not managed to plan so far in advance and looked rather crestfallen when they were unable to purchase bacon butties, fortunately I found 2 pork pies in my saddlebag and shared them with my 2 hungry clubmates - an action I was later to regret (the energy from the pies went straight to their legs).  That well known Glaswegian, Hardeep Singh Kohli was at the premises together with a Radio 4 recording team interviewing a couple of veteran cyclists and walkers for a show that to be broadcast I know not when - we were advised several times that we had to keep quiet or we would spoil the recording but it was very difficult to obey so after a photo call we left, but not before the chap who makes the tea gave me the above enamel brooch which has now taken pride of place in my badge cabinet - you should have seen the jealous look on Ians face.  We came home via Roughlee, Colne, Winewall and the Herders stopping off at the Bay Horse at Oxenhope to look at dirty mountain bikers who were finishing the Hospice MTB Challenge. We were expecting to see Grimpy who had planned to use the event to add the finishing touches to his 3 Peaks preparation but he'd given it a miss as he's been down with a cold. We did find Richard though who was bemoaning the fact that a certain top 100 place had been lost due to a navigational error but once he'd had a pint of bitter he looked happy again, telling us about the new racing bike he's ordered (far superior to Damian's I am led to believe). Richard had also ridden last weeks Holme Valley MTB Challenge finishing 48th out of 288 and appeared far happier with his form than he has been all summer - good luck in next weeks 3 Peaks.

NOTICE OF AGM
The AGM is to be held at 8pm Wednesday 10th October at the Cat I'th Well pub, Wainstalls HX2 7TR. Please make every effort to attend and tell other Condors whom you may chance upon over the next couple of weeks.
Posted by petehorne at Sunday, September 23, 2012