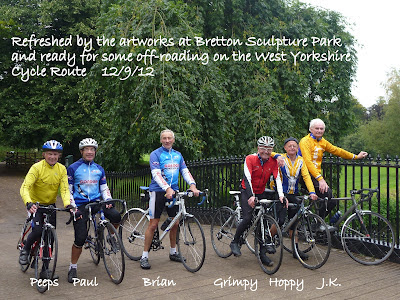 Showers meant that only 7 attended at Shelf Roundabout last Wednesday.  We made our way down the Greenway to Dewsbury and to Newmillerdam for lunch via Thornhill. After lunch we rode on the back roads through Notton before joining the West Yorkshire Cycle Route just before Darton. We followed the Route through Bretton Sculpture Park where we dallied a while enjoying the works of Hepworth, Moore and Gormley before riding up the bridleway to High Hoyland and home via Emley, Briestfield and back up the Greenway. As always a pleasant day out at club run pace - highly recommended.

Dates for your diary

Another name to add to the injured list is that of Wednesday club regular Paul Daly. Fresh back from the Czech Republic where he had won gold in his category in the mountain bike and silver in the road race at the Firefighters World Championships and training hard for the 3 Peaks he took a fall on a roundabout in Saddleworth whilst on his favourite training route over the Isle of Skye resulting in a fractured femur and thumb. Paul's still on crutches but is optimistic about making a come-back in time for the 'Cross Nationals in January which are being held in Bradford. Good luck and get well soon from all the Wednesday riders.
Posted by petehorne at Tuesday, September 18, 2012