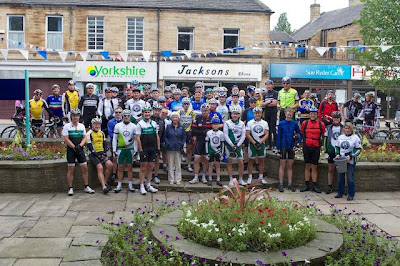 I've copied the following from the Ravensthorpe CC's 'Thorper Blog' -

'Firstly it was a time for reflection, todays ride in memory of the passing of a fellow cyclist Andy Ridsdale, and as the day went on it was evident how many riders had rode and knew Andy, and i”m sure his mother who waved us off must of felt joy and sadness in it all.      And so, on our now annual celebratory ride we welcomed fellow cyclists from around the district to join us in what is now known as the 120 ride.     We all met at the library which is the normal meeting spot for Ravensthorpe cc, but this time an hour early at 8am.   So with riders of a group around the 90 mark, we set off to Dewsbury and onwards for our first stop at Tadcaster.   it was nice to see the new members of Ravensthorpe  finding the tempo non to aggressive for what was their first time in a large group and can only bode well for the club as it tries to encourage and attract local cyclists to the club.   Once we got to Tykes cafe in taddy we all sat down for a coffee and a chat, for many this was to be the turning point for home, deciding to take the shorter ride leaving a now smaller group of the mid 40s to carry on for Sutton Bank.  The roads were nice and quiet as we headed onwards for Easingwold on the relatively flat roads , all the time everyone anticipating the first big climb up over the bank.  Pain and suffering for me as the cramp struck at the worst possible time as i hit the hill, got to say the cafe was a welcome sight and the need for food never more so, doesn”t get any cheaper does it!  The journey home in full sun made the trip worth it as the tempo cranked up hitting 30 mph for long stretches as we passed Borobridge for home .  I would like to thank on behalf of our club those who joined us today , wasn”t it great to see all different club shirts together?  A final word of thanks goes to Daz Whitely, Daz drove the full route [ wouldn”t you if you had a fancy lotus sports car?] taking pictures , thankfully not of me going up the big hill, hitting my thumb with a hammer i showed less pain on my face, Daz you a star and your good turn will never be forgotten . Got home with 130 on the clock with an average of 17 mph, bloody glad to get of the saddle , 130 mile on the flat left me with something a African baboon would be proud of, chamois cream ! next year its axle grease.' 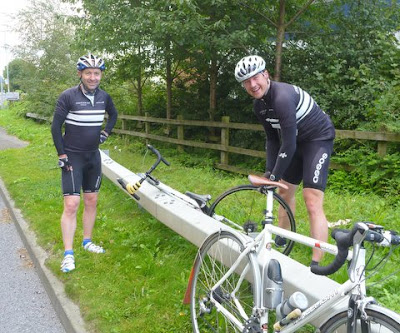 There were 4 Condors at the start, Richard, Simon and myself loitered at Tadcaster cafe whilst Damian continued for the full route. We were joined at the cafe by Kev Brown who had his caravan parked near Selby so after an extended stop we made our way by the back roads to York then south via the Transpennine Trail to Selby and round Bishopwood to the cafe at Sherburn in Elmet for another tea break. We then said goodbye to Kev and rode home via Rothwell and Dewsbury. An easy day and a welcome change of scenery.

Along with Melvin I've entered The Cumbrian sportive next Sunday (although I'm not expecting to see much of him - perhaps a brief glimpse of his back wheel). When I saw the route I just couldn't resist - there's still time to enter so have a look at it, it should be memorable.

If the weathers not too bad I'm going to have a ride out to Blackpool next Wednesday to see the finish of stage 4 of the T.of B.  I suspect there may be a few other intending to do likewise so I'll post a meeting time & place later.
Posted by petehorne at Tuesday, September 04, 2012