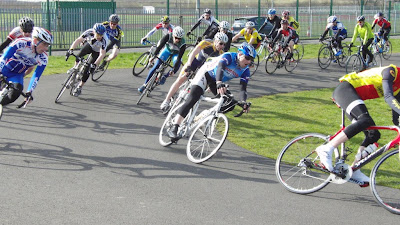 After being DNF in his first 2 road races Simon today didn't just find his way to the finishing line but sprinted away from the bunch to win in style. What a great achievement for someone who only 2 weeks ago had never raced on a bike ( I'm assured that last years Paris-Brest-Paris was not a race). Congratulations from all Condors, I'm looking forward to hearing a blow by blow account .

Today's Club Run
We eventually made it around the Silverdale route after several postponements due to adverse weather. We were a depleted pack due to the alternative attractions of a mountain bike ride from Hebden Bridge. Myself, Damian, Richard and Pete W battled the headwinds from Denholmgate collecting Nigel at Keighley (yes that's correct, Nigel - I wonder if its now Melvin's turn to go missing for 6 months).
Nigel turned off at Rylstone leaving the four of us to fight the winds in the hope that once we turned up the Silverdale road from Halton Gill we would pick up a bit of tail, but that wasn't to be as the breeze funnelled down towards us between Fountains Fell and Pen-y-ghent.
The road from Stainforth; sun, clear blue skies and tail wind made all the effort worthwhile. Predictably on the 1st sunny Sunday of the year, Settle was packed to capacity so someone came up with the bright idea of going down to Hellifield Station where we were assured the cafe is always fairly quiet (or so he said). Anyway I was wrong the station cafe was full with a Harley-Davison motor cycle convention and the staff (all one of him) was moments away from a heart attack. Now in desperate need of a cup of tea we made our way to the Dalesman at Gargrave via Bell Busk - success at last - cholesterol butties and tea - just the job after 60 odd miles without a break.
From Gargrave home we had the usual burn up with Pete W, recently returned from a weeks training block in Tenerife, again inflicting pain on us mere mortals (there is speculation that his fat rear hub hides an electric motor not a power meter). 92 miles @ just over 17mph.
Posted by petehorne at Sunday, March 11, 2012