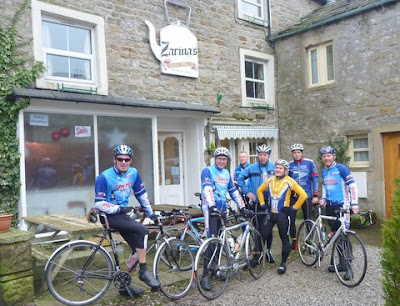 On a much better day than the previous few years I met Damian, Richard. Sean and Pete Whiteley at Denholmgate at 9am. I'd ridden up there with Pete Smith but he chose not to stop. We hung round for 10 minutes expecting Ian (and possibly Nigel & Neil) but no one else arrived so we made our way towards Keighley collecting Paul Hickey at Manywells, Robin near Flappit and Mel as we approached Keighley. In Keighley centre we were joined by Bingley's Joel Davison, busy getting the miles in before returning to Belgium early February for a 3rd racing season abroad.
I was happy to see Ian at Keighley roundabout, I was beginning to think he had gone down with the Wainstalls Virus. Former leading British Professional and Olympian (Montreal 1976, Road & TT), Dudley Hayton also joined the growing peloton and a brisk pace was maintained through to Skipton where Paul turned off on the Gargrave road.
I had been a little worried about whether I would survive the drag out of Skipton up to the Craven Heifer roundabout but in the event Robin and Joel set a good pace without putting the hammer down. Unfortunately Richard has obviously been doing too much celebrating over the festive season and although he was sliding back through the bunch rather foolishly in my opinion, rejected an offer of a push from Dudley and said he would see us at the cafe.
A good pace was maintained to Kettlewell, Dudley turned at Kilnsey and we crossed Pete Smith coming out of Kettlewell as we approached. I was relieved to see that Madame Zarina's fine establishment was open, we were given a warm welcome by the ladies who were soon busy preparing food and steaming pots of tea. Richard arrived some minutes later and busied himself trying to decide whether it is his age or the bike which had caused his detachment. Another 5 minutes or so later and we welcomed Daniel from Pedalsport who had been late to the start.
I was just ordering a sweet course and Dan was just starting his baked beans when Robin started prattling on about setting off back. We had a lively exchange of opinion but unfortunately others followed his bad example by donning helmets and paying bills so no time for a visit to the gents and we were off again.
The pace was again brisk, I think we probably lost Richard somewhere up that short steep climb out of Threshfield; he was nowhere to be seen when I looked back at Cracoe. Pete Whiteley and Mel appeared to be having a personal battle at the front and I was relieved when a more sensible pace was maintained by Damian and Joel on the Skipton Road. Sean and Ian put in a good turn from the level crossing with Damian and myself taking the peloton through Keighley.
I'd already decided that I was going to be dropped up Ingrow and I was right, but the hammer didn't really go down and at the top Damian and I were only 40 or so yards off although the distance expanded on the flat. I put in an effort as they stopped at the lights by the Flappit pub, Damian came off my wheel and bridged the gap but I remained at 20 yards and try as I might that gap wasn't coming down with Sean and Pete driving away at the front, so I gave up and said goodbye.
I did have a quiet chuckle to myself when I saw the glazed expressionless look on Pete's face when I passed him up Church Bank coming out of Denholme -I hope he got home alright.
My computer showed 73.2 miles at an average of 17.3mph but more importantly we had a good day in the Dales - here's to next Sunday!
Posted by petehorne at Monday, January 09, 2012