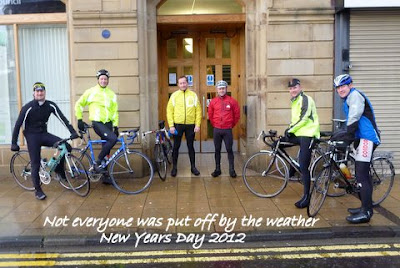 The rain was absolutely bouncing down when Brian rang me at 9.15 to say he was giving the New Years Day ride a miss, I told him that I would go down to Brighouse but didn't expect anyone else to turn up. After once again looking at the heavy rain I decided that it would be stupid to get wet through just to go to Brighouse and back but having been the person who had publicised the ride via the blog I felt that I ought to be there in the unlikely event that some lonely soul did turn up, so I went down in the car. With the windscreen wipers on extra fast I drove towards Brighouse and was rather perplexed to find that it was only a slight drizzle by the time I got there. I was even more surprised when 6 hardy cyclists did turn up and subjected me to such verbal abuse that I had not heard since retiring from the constabulary.
I hope they had an enjoyable ride and I am happy to see that as I write this some hour and a half later the rain appears to be getting heavier again.