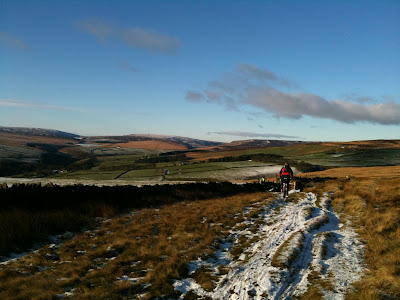 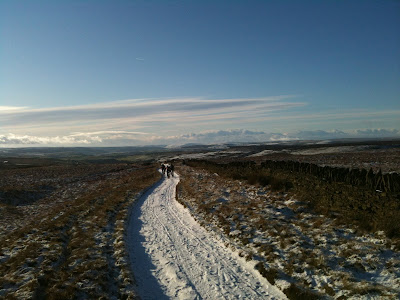 weather too good to take to t'road found us up on tops for a bit of banter with the moor ... steve, nigel and myself found ourselves drinking tea at ian's in leisurely sips, giving time for steve to gooey over the new small shivering sack of bewilderment and cuteness that was the robinson's new puppy called basil ... 9.30, for such was the lateness of the start - came and went, and then we clambered up onto old road and along top path where nigel took two headers in the space of a few hundred yards, the first in private, the second very public ... it seems the ice was not sufficient to hold his new found bulk, or was it that skinny tyre he had on the front wheel (nigel proffered the later cause, we demured) ... so he kept cracking through where the rest of us skated nimbly on ... he held it like a real man though, unaffeared of the inevitable (twice more) ... poo farm found me with a shoe full of shit and steve claiming fatigue, which meant an altered route up and down over walshaw then a new path that had all the hallmarks of a 'barker' route, sure enough we were 'barkered', pushing through a stream, having to bump our way down ice clad steps etc etc until the road and a quick bray onto heptonstall and the inevitable sausage, bacon and egg .. ian tried to resist the sausage but his will power was pitiful ... then down past blue pig, before a huge collective sweaty push up behind the toilets with helmets off, a real treat, though we found ourselves having come to early (for riley that is) ... so i went on, and the others went off to pre-riley meeting at lane ends
Posted by robin at Monday, December 19, 2011