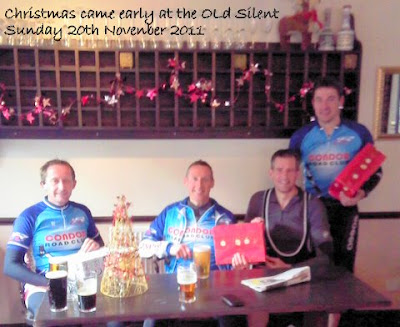 Four Condors turned up in the autumn mist at Denholmgate – Damian, Simon, Phil and myself, we were joined by Mel, Robin & Steve at Keighley. We were soon away from the main roads turning left up through Utley to Keighley Tarn and left again over Sutton Moor. As we passed the Snowden Memorial the mists were rolling off the moors revealing brief glimpses of low sunlight - the views almost made the effort of the initial climb worthwhile. Left on the main road at Cowling and right at Reedshaw Moss to take the back lanes over to Earby. Steve had left us at Bleara Moor explaining that he had work to do on his new house extension, the confusing thing was that he went in a diametrically opposite direction to his home; I'm looking forward to hearing if he got back before lighting up time.
From Earby we took the usual route up through West Marton and were at Hellifield Station before 11o'clock. S,b& e butties for the carnivores and a double! egg sandwich for Robin – a bit worrying he doesn't usually eat that much – must be intending to put the hammer down later.
Back through Paythorne, Horton and Barnoldswick from where we took the ridge route past Fanny Grey's, through the ford by Foulridge Reservoir and on to Laneshaw Bridge. It was then over the Herders and on to Stanbury where a refreshment break was called for at the Old Silent. The beer (Ilkley Brewery) was spot on and after a couple of pints we decided we were definitely doing the Calderdale Cobbles ride next Sunday. Once refreshed we sped off over the Penistone Hill and Dog & Gun climbs (well the others sped off with me following at some distance).
75 miles with 7100 feet of climbing – definitely harder than the previous Sunday's 133 miles.

So its the Condor Calderdale Cobbles Ride next Sunday – 0930 outside the Red Rooster at Brookfoot, similar route to last year but with the inclusion of The Buttress out of Hebden Bridge and a tea stop at Towngate Tearooms, Heptonstall. All welcome to join us - its not going to be a race (I hope). Remember that the cobbles will probably be wet and leafy and some of the descents are more treacherous than the climbs so 20mm tyres with 140psi may not be the best choice – as a guide Mel and Robin are riding mountain bikes.
Posted by petehorne at Tuesday, November 22, 2011