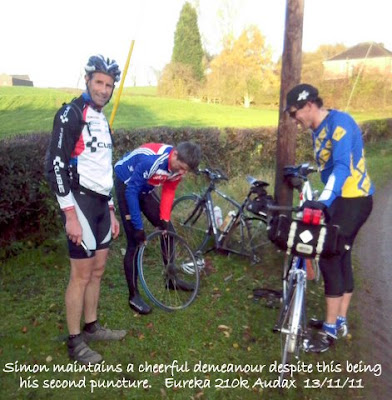 It was a beautiful weather on the western west side of the Pennines for last Sundays Eureka Audax event. Although the Condor's were a little late away from the start in Cheadle we were soon setting the pace at the head of the 70 odd field. A tail wind for the first 70 k's out to the Eureka cafe on the Wirrel ensured that a high pace was maintained, the main bunch splitting on the first climb of any note, leaving 9 or 10 in the breakaway. As ever the Eureka was packed with Scouse cyclists so as soon as our cards were stamped we were away, joined by Harrogate's Bob Johnson of VC167 and one other. It was mainly cross head winds for the rest of the day as we made our way through an intricate puzzle of back lanes. Although we had several enforced stops on the rest of the journey (Simon 2 punctures, Bob 1 puncture, Phil a loose crank and a broken spoke for me) over the Dee into Wales then back up through Cheshire only 2 other Audaxers were seen before the finish. Stats. 133 miles, ave speed 17½ mph.
Next event - Winter Solstice 200, 18th December - enter early.
Posted by petehorne at Wednesday, November 16, 2011