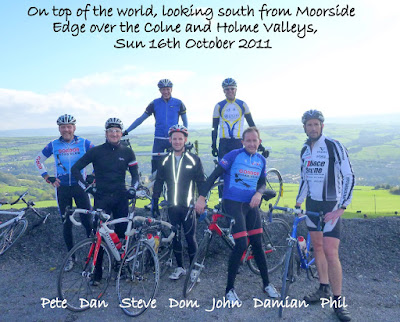 The choice of Elland Bridge as a meeting point for last Sundays Club Run turned out to be quite popular with 8 eager athletes present by 0830hrs - a 9th, Pete Smith also turned up but on seeing the motley bunch that had assembled he rode off alone.
It being the Social Season a quiet scenic route was chosen - just over 50 miles with 2000+ metres of climbing - from Elland we rode up to Stainland via Holywell Brook. Then down Stainland Dene and past Wheelwrights Mill (or where it was) and up to Pole Moor. Round Bradshaw and past the Rose & Crown down to Marsden and up Old Mount Road to join Standedge Cutting by The Carriage House. From the top of Standedge we avoided the busy roads, going through Diggle and Pobgreen eventually coming out on the Isle of Skye road by Tunstead. At this point the peloton became excited to see a familiar road and left me to battle the incline alone, over the Isle and down to Holmfirth via Flush House and Hogley Green, beautiful back roads usually missed on training rides. 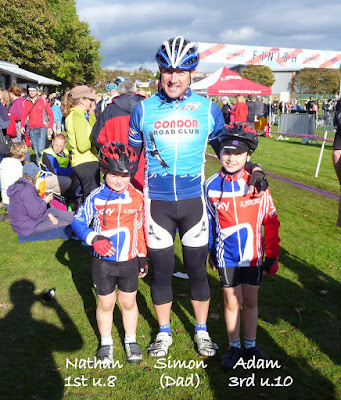 We regrouped at the cafe and planned the route to Salendine Nook where Andy Whitworth was promoting the 2nd round of the Rapha Supercross Series in the afternoon; the promise of a Belgium beer tent creating much anticipation and excitement. Not wanting to spoil the days hilly backroads theme we headed up to Upperthong and Wolfstones Height before dropping down through Meltham and over to Slaithwaite via Blackmoorfoot. The 'coup de grace' of the days endeavours must surely have been the next climb, Meal Hill Lane up to Moorside Edge, it almost proved too much for one our number who got off to walk - only the sight of a camera spurred him back onto his bike - I'm not going to say if this rider/walker was Dom or not and I've told his dad not to mention it to him. 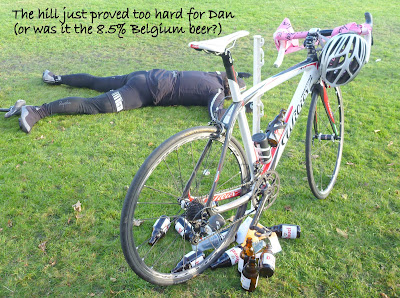 I was only intending to make it a quick visit to the 'Cross. Grimpy, Vicar and Steve were in full flow flying the Condor colours in the Vets race when we arrived, Simon's two sons had both made the podium & the sun was shining and it seemed like half the audience were old riding buddies, and the beer was pure nectar. This glorious combination led to it being well past 4pm when we jumped back on our bikes and raced back towards Brighouse. A great day out.