How to recover after PBP 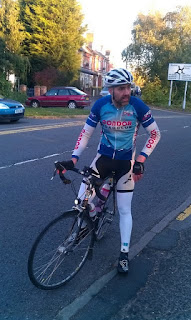 If I'd been asked what the best approach was to recovering after this years Paris-Brest-Paris I doubt if I would have suggested riding a 600 in Wales - Here's Danial's report.

After a solid, comfortable Paris Brest Paris, and a couple of hilly rides out since then, I didn't think twice about signing up for a 600km ride with friends. The weather forecast was superb, my bike looked OK, everything was good. And as it happened, everything was good. The weather was glorious all weekend, and I got round in time to get my train home. But I'm writing this two days after getting home, and I'm still unable to walk properly. If I'd bothered to look at the route first, I'd have realised just how tough it would be.I met up with two audax chums outside Morrisons in Redditch at 6am, and we took empty A roads down to Chipping Norton to meet up with two others. We then spent a great days passing over the Chilterns, the Cotswolds, the Cambrian mountains and Brecon Beacons to Monmouth. It was sunny and warm all day, but the temperature dropped rapidly once it got dark. We got to a Travelodge outside Monmouth at half one in the morning, for four hours kip. Three of us wanted to get back in good time on Sunday, so we set off at half five to reach the Black Mountains for dawn. The others would take the Gospel Pass later, but we went for the faster (but still pretty lumpy) lanes to the east. As we were pushed for time, this would the first of just three15-minute garage raids, to stock up on supplies. We had to cover 240km by 6pm, and one of us, who was on his first 'unsupported' 600km audax, was starting to suffer with the heat and the pace. The hills to Stow on the Wold were a struggle, but after that it was easy riding through pretty lanes back to Redditch. In the end I got back to Redditch with 17 minutes to spare before my train.We covered 625 kilometres in 35.5 hours, with 7,500 metres of climb. It was tough going; lots of hills, hot weather and few facilities on the route. It was worth it though. I had thought I wouldn't do much after Paris Brest Paris, so this was an unexpected treat."CheersDanial 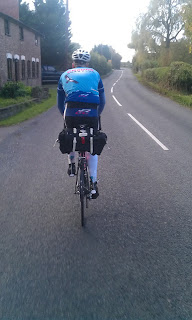