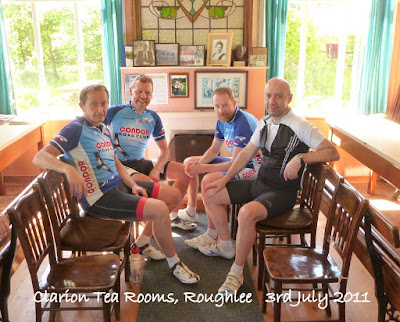 A nice steady 60 miles with 2 cafe stops - why can't every day be like that. Just four of us turned up at Luddenden Foot on a beautiful sunny Sunday morning. It was good to get off the valley road, potter up Mytholm Steeps and enjoy extensive views of the Upper Calder Valley and as far afield as Pen y Gent and Whernside from the Long Causeway. We took mid morning tea (55pence a pint) with our comrades at the Clarion Tea Rooms - a magical place - if you haven't visited, you should, either by bike or on foot but if you want anything more substantial than tea and muesli or chocolate bars take your own. After a good hour sat in the sun and chatting to the regulars we made our move. Roughlee, Borrowford and Nelson then on the Seasons of Mists route up past Coldwell Tea Rooms to Widdop. 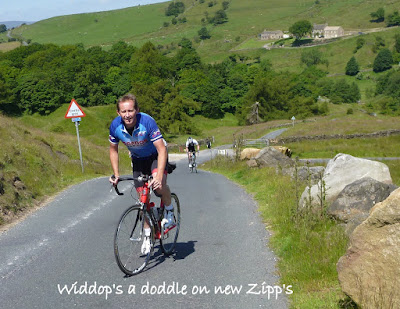 I had hoped to get a few group pictures of the ascent of Widdop but with Damian's new wheels refusing to drop back to the bunch and with Richard worrying about whether his hair was straight my photographic ambitions were thwarted. 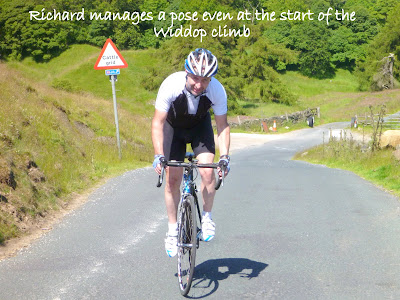 Such was the relaxed atmosphere of the ride that as we approached Heptonstall there was a suggestion that we may stop for a coffee at Steve's magnificent establishment. This idea was taken up with enthusiasm by all, the coffee (and the free refills) and the flapjack were 1st class. Richard left for home but Damian and myself escorted Ian up to Mt Skip, on Heights Road and round by Jeruselem Farm for the final sprint up Jowler to deliver Ian almost to his front door.

On the racing front Brian had another busy weekend, 8th overall in the Vets National 10 mile Time Trial Championships in Cumbria on Saturday evening with an actual time of 21min52secs, (+9min53secs faster than his age standard). He and Grimpy travelled to the Yorkshire Wolds on Sunday where Brian took 2nd and Grimpy 4th in the Vic Sutton Memorial Road Race, the same positions that they achieved in the previous weeks road race when Brian went on to record 1hr55min the following day in the Otley CC 50mile time trial.

There's a few local Audax's coming up soon, Paul Gower's ordered a brand new all carbon fibre speed machine and he's looking for people to hammer in the Brimham Rocks 200k on the 24th and the following Sunday (31st) Chris Crossland is putting on 'The Other Fleet Moss Randonee' 200k from Halifax.
Posted by petehorne at Monday, July 04, 2011