"Its harder than the Etape' du Dales" was what one 2011 Etape' veteran was heard to say during yesterdays Coverdale club run. Whether it was on not, one thing was certain, the weather was a lot better. A good turn out saw Damian, Grimpy, Robin, Ian, Neil, Simon, Mick and myself leave Denholmgate at 8.30. Dissapointed not to pick up any more Condors at Keighley we nevertheless made good pace to reach Kettlewell in very good time. 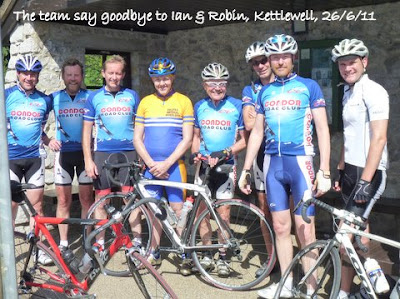 I believe Robin has never ridden up Park Rash - and he still hasn't - On seeing the Giant of Wharfedale in the distance he remembered an urgent appointment and decided he needed to head for home, unfortunately Ians magic carpet, which had been moving majestically for the previous 35 miles also faltered and headed with robin down the back road to Conistone. 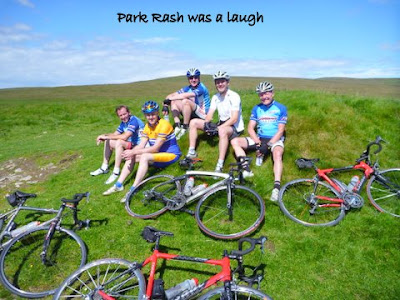 The rest of us continued our merry way dancing on the pedals without a care in the world as Park Rash hurried by beneath our wheels (although John was spotted putting a foot down momentarily, we accepted his explanation that he had only stopped to take his glasses off) . A tail wind down Coverdale; through West Scrafton and East Witton, past Jervaulx and up the climb to Ellingstring. A head wind then slowed our progress towards towards Nidderdale. Neil was getting a bit grumpy but insisted that he wouldn't stop till How Stean, 'cos thats what it said on the blog'. Mick and Simon had obviously recovered well from the previous weeks 600's and Damian was showing us the benefits of continental training camps and chain gangs. Grimpy (who had been road racing the previous day) was riding roads he'd never been on before and enjoying it. There was a bit of a burn up over the moors after the reservoir's - started by Damian trying to half-wheel Mick, but Mick and Simon proved peerless over the moors and gently eased away.
Unfortunately Damian broke a spoke on his super-doopa Ksyrium rear wheel descending down to Lofthouse, as happens with these expensive modern super fast wheels one broken spoke rendered the wheel useless, it was jamming at both sides of the chain stays, so much so that in attempting to freewheel down to lofthouse he rubbed a long gash in the sidewall of the tyre which settled beyond doubt that he wouldn't be riding again that day. No mobile signal so we made our way to How Stean Cafe where we were allowed to use the land line. No response at relations numbers, then we tried Big Grinner, who many of us know from the good old days of the Condor Monday evening mountain bike rides, what a star, he immediately volunteered to carry out the mercy mission - Grinner - for acting above and beyond the call of duty you are now an honorary member of The Condor. 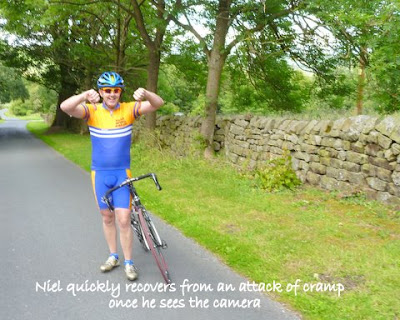 After an all day breakfast we set off for home. Neil was worried we may take him somewhere he didn't want to go so he was allowed to choose the route which was Pateley, Yorke's Folly, Menwith Hill, Norwood Edge, Otley, Canal Road and Manchester Road, a route that was enlivened several times by Neil giving impromptu break dancing demonstrations. A hard ride but we were all still smiling at the end.
Addendum (means "hanger-on" in Latin): Thanks to Pete Horne for the write-up, and for Pete Smith I'll add my commiserations & best wishes for a speedy  recovery.
I've just not ridden enough recently to keep up the cruising speed of a Condor outing all day. After controlling the pace through Skipton and on to Cracoe with my brief spell on the front, it was a pleasant few miles to Kettlewell being swept along at the back of this fine flock. However, getting detached on a gentle rise told me my legs were starting to go and I decided, after only a short deliberation, to hedge my bets and join Robin heading south back along the quiet side of Wharfedale. We went up & over Storiths, just for the hell of it, and then Robin rode away from me on the flat to Addingham. That's where I begged him to bugger off leave me in peace so I could trundle home at my own pace. I'm glad to hear that the rest of you conquered Coverdale in style and what a stalwart coming to the rescue of Damian after his wings got clipped.
Ian
Posted by petehorne at Monday, June 27, 2011