I'll start with the bad news, Pete Smith's progress towards the top of the podium has been put on hold following a training accident on last Thursday's chain gang. He fell heavily after hitting a deep pot hole on Wakefield Road near Sowerby Bridge and sustained a fracture to his pelvis and several ribs - he spent 2 nights in hospital and expects it to be 6 to 8 weeks before he can ride again - I spoke to him yesterday and he sounds to have accepted the enforced lay off with a positive attitude and is looking forward to being able to come out and hammer us again before the year is out - best wishes for a speedy recovery form your fellow Condor's.
With Pete's absence from the bunch just Brian & John were left to fly the Condor flag at last weekends top Veterans Road Race, the Tom Simpson Memorial Race at Harworth. They didn't do a bad job as well with Brian 1st and Grimpy 2nd in the F age group they couldn't really have done better.
There was a disappointing turn out from the Condor at the Good Companions 200k Audax last Sunday, just Richard and myself who were joined by a mate from Monday mountain bike rides, 'Big Phil' Purdy, who was putting the finishing touches to his preparation for this Saturdays Arctic Marathon (running) somewhere in the north of Norway.
We soon established ourselves in the leading group being joined by Bob Johnson of VC167, Nigel from ABC Centreville and a lad from Peterborough. A head wind for the 1st 50 miles or so ensured we had something to look forward to on the homeward leg. Whilst it was raining in Calderdale the roads were dry by Longridge and the weather got better all day. We passed many weary looking riders who had set off at 6am the previous day to ride the 3 Coasts 600, the 1st of these was Mick Collins (well we didn't actually catch him because he was going the other way having almost finished - he was hours in front of any other riders - our own Simon Fortune was also riding the 600 and I was expecting to see him not far behind Mick but I've heard a rumour that he blew-up sometime during the early hours somewhere in darkest Lancashire and seeking shelter from the wind and rain booked in to a hotel for a few hours sleep - I told you the previous week you should ride the GC with us sensible lads).
After a stop at Glasson Dock we had 60 miles of tail wind to look forward to - to my surprise the wind hadn't swung round and hadn't disappeared it was actually pushing us along very nicely - too quick for me - I was finding the undulations over to Chipping hard work - Bob kept going off the front then letting us catch up before doing the same again. Richard had been riding strongly all day and appeared unaffected by the changes in pace and Big Phil was lapping it up, being his first ever Audax he was in heaven. With 50 miles to go to the finish I told them not to wait for me, I wanted to ride at my own pace. I got to Whalley Abbey Cafe control and they had stopped for tea - I carried on expecting them to catch me on Burnley Bypass or Blackstone Edge; they didn't. I got back to Mytholmroyd CC at 4.30, Phil and Bob came in 10 minutes later and Richard came in at 5pm looking knackered but happy to finish his first 200k Audax.
Happy Birthday to former Condor; the Halifax Imps own Paul Hickey, 65 today, we celebrated this milestone yesterday by dragging him over Slippery Ford & Elslack to have a birthday lunch of sausage butties and chocolate cake at Hellifield Station. The fun continued all afternoon as we followed a reverse Spring into the Dales route to Earby, Black Lane Ends, Herders, Pennistone Hill and the Dog and Gun. 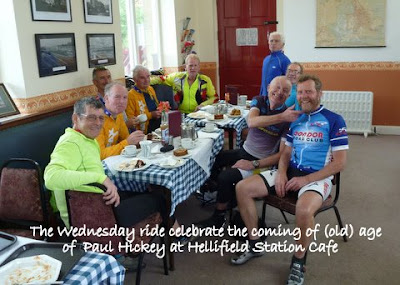