Quick report -
It was "rather damp". Increasing to "wet" by midday. But getting a bit better later on.
We had a full turnout of a dozen or more riders. How many more would come on a sunnier day I don't know. So there we are in jackets at the start and we met with a few more in Keighley. Out along the back road through Connonley and Carleton, then gathered pace towards Gargrave. I'd had my money's worth out of my back tyre and it went "phut" loudly. A couple of kindly souls stayed with me (sorry about the broken tyre lever Nigel), but it was not the weather to hang about. The racing lads set off over Darnbrook without a break. Repaired, our smaller group went on to Gargrave (closed) then Airton, arriving damp and leaving very cold. John Lumb came in as we were making to go, so he took advantage of our wheels for the way back. It took me until Broughton to start coming round again and lift the spirits. Another puncture on Ingrow (sorry - again) delayed us enough for the fast boys to appear in ones and twos, so obviously the "A" ride had blown apart in the end. I wasn't the only one nursing a poorly bike - Chris T had a broken spoke to contend with. Still, it got me home and I've made sure to put a new tyre on right away. Ian
It has been decreed that this Sunday we'll be heading for the cafe at Airton. It has been mentioned, in passing, that some keen lads might get there by going over Darnbrook. Others might be finding more sensible routes. However you do it, I hope that you have a good ride.
ps. There is of course a slight issue, in my opinion, with the cafe at Airton. My views on bacon butties without egg are well-known. It simply won't do. And, furthermore, no decent butty ever came with a limp bit of salad on the side. So I'll be going there under sufferance, but, for good harmony, I'll try not to mention this point again. 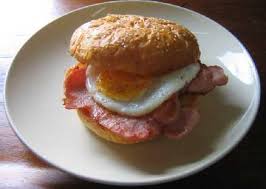 pps. Do you know how hard it is to find an image on the web of a good bacon & egg butty? Naked women and people doing stupid things aplenty. Or am I looking in the wrong places? This one has all of the right ingredients, but will you just look at the state of that egg. And are those seeds on the top of the bun? The bacon might be passable. At best it gets an RBE* rating of only 3/10.
RBE* - Robinson's Bacon & Egg rating. Soon to replace Michelin stars as a guide to eateries worth visiting.
Posted by Ian Robinson at Thursday, January 13, 2011