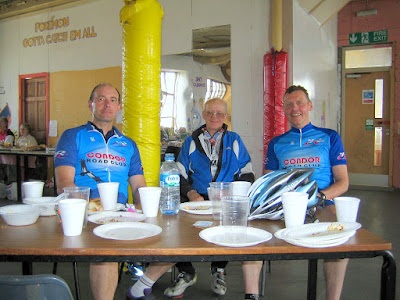 Commiserations to the ill & injured - it is unlikely there will ever be such a perfect day for the event again. Melvyn, Lumby, Richard, Clive, Paul and myself represented the Condor. Melvyn and I found ourselves with a sporting group which included Pete Whiteley, Mick Collins, a butcher from Hebden Bridge, a triathlete from Luddenden Foot, a doctor from Sheffield, a boxer from Stainland and a sprinter from VC Briganti. Spurred on by perfect weather conditions a cracking pace was sustained throughout the ride. Mick Collins and his mates 'pulled a fast one' by racing away from the Keighley checkpoint whilst others were still being served, however divine intervention struck in the form of Mick sustaining a puncture at Pecket Well allowing us to offer our sympathy to him as we passed him by the roadside on our way to finish at 1330hrs.